With over a hundred films from twenty-five countries screening since Jan. 9, the Miami Jewish Film Festival celebrates its twenty-third year. For cineastes, MJFF presents almost two weeks of opportunities at the start of a new year. For film critics with second jobs, it’s a way to reactivate muscles dormant since the onslaught of end-of-year screenings. And MJFF has never disappointed: last January, for example, marked the South Florida debut of Christian Petzold’s Transit, one of 2019’s best films even if it took a second viewing to think so.

If the films I’ve seen share a theme, it’s the fraught relations between parents and children, the latter serving as vessels to communicate thwarted ambitions and suppressed hatreds. I’ll serve on the jury for the awarding of the Critics Prize to one of six films, among which are the entries below. Before festival’s end on Jan. 23, look for a few words on Václav Marhoul’s adaptation of Jerry Kosinski’s The Painted Bird, a finalist for an Academy Award nomination for Best International Feature Film.

While Curtiz (played by Ferenc Lengyel) frets about the script about a contemporary wartime drama that producer Hal Wallis has hustled on him, his illegitimate daughter Kitty (Evelin Dobos) manages to get herself cast as an extra, unearthing the expected tensions between the man born Manó Kaminer and the gruff womanizer about whom it’s said, “Magic happens on the casting couch,” between Curtiz and the grown child who reminds her father that there are things at stake besides the completion of a film.

This sounds more compelling than writer-director’s Tamás Yvan Topolánszky presents it. There’s simply too much going on in a film less than ninety minutes long. Besides, who cares about Michael Curtiz, and why would anyone watch a fictional making-of feature in which the actors playing Humphrey Bogart and Ingrid Bergman are seen in glimpses? (Considering the SNL-level imitations, perhaps it’s for the best.) Shooting Curtiz in black and white adds a layer of sentimentality that the material can’t support. “With this film, we’re going to win the war,” a character says. That’s all it took, you see: Paul Henreid singing La Marseillaise while Conrad Veidt and his Nazis glowered.

Those Who Remained, dir. Barnabás Tóth.

Approaching the material as if he wore a hazmat suit, director Barnabás Tóth treats Those Who Remained as a series of conversations between two lonely and war-scarred people. Often it’s hard to discern Tóth’s attitude toward the material. A montage showing the protagonists playing chess, watching movies, and sharing a platonic bed while Klára in voice-over recites a letter to her beloved papa generates a certain expectation, and, to its credit, Those Who Remained doesn’t shirk from confronting what has stirred audience discomfort. What’s left, though, as the film inches toward its conclusion, especially as Klára starts dating boys, is an oasis of a relationship, foreordained to dissipate when circumstances change. 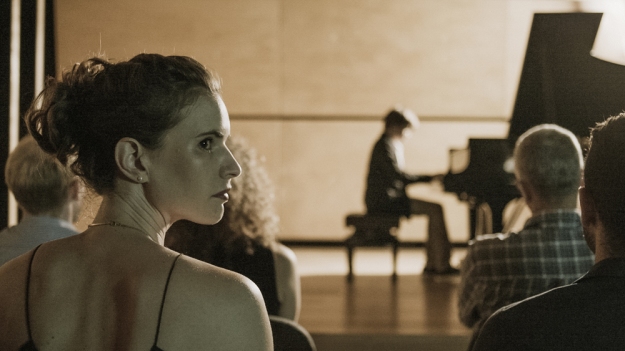 The adult daughter of a renowned composer-pianist, Anat has felt her own musical ambitions stifled. When she gives birth to a deaf son, she goes to extraordinary lengths (no spoilers here) to ensure he has a artistic future. Five yeas later Idam is himself a composer of promise, to the disbelief of his teachers but not Anat’s – it’s what she taught him to be. The obsession with Idam’s triumphing over her father climaxes when he not only plays one of his pieces but, like Mozart to his Salieri, improves on it. To help Idam gain admission to a prestigious conservatory would be Anat’s crowning achievement.

Nothing quite goes as planned in writer-director-editor Itay Tal’s prodigious debut, which has the concision, severity, and sense of growing horror of good early Michael Haneke. Crucial to God of the Piano‘s success is Naama Preis, who plays Anat with the right degree of ruthlessness for which the Jerusalem Film Festival awarded her Best Actress. Tal reveals himself as a resourceful filmmaker in this eighty-minute feature. There’s rarely a moment when Tal situates Anat outside the frame when Idam’s playing, and he’s not above using horror film tactics, for example during a chilling scene in which the sound drops to simulate what Anat thinks is Idam’s deafness. Not to be missed.