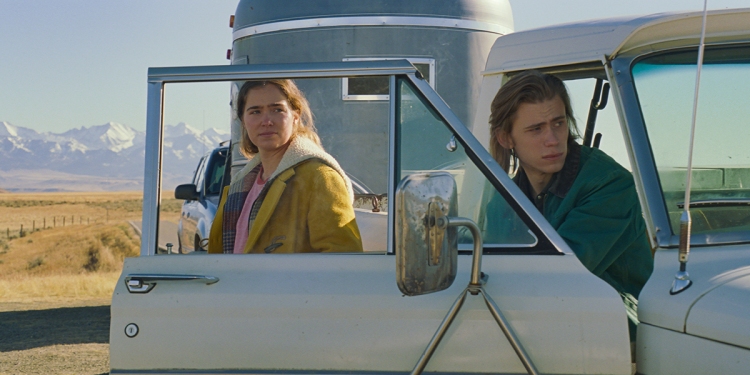 This yarn about thwarted love and open hate — they are as ever synonymous — won me over when in its first thirty minutes it upended decades of clichés about scientists. Civil engineer Cal (Owen Teague), home in this coldest and cruelest of states to watch the slow death of his bedridden father, distracts himself by reading Wuthering Heights. Emily Bronte’s novel about thwarted love, open hate, and cold, cruel geography would be rather on the nose if Cal didn’t express himself with a becoming literacy. Later, facing a canyon layered like a chocolate cake, his estranged sister Erin (Haley Lu Richardson), a chef at a New York farm-to-table joint explains (archly) Dante’s circles of hell. Smart kids!

Writer-directors Scott McGehee and David Siegel, whose The Deep End (2001) and an underappreciated adaptation of Henry James’ What Maisie Knew (2012), have two terrific actors in  Richardson and the rangy Teague, the latter often lit to resemble A Nick Cave unacquainted with dissolution. Montana Story needs them: it boasts more plot than it can manage. Faced with a heap of debt, Cal has to sell off a horse and possessions while simultaneously accepting the consequences for abandoning Erin to their violence-prone dad and shielding a mining project from government oversight. interweaves the violation of the land into the story, while stoical Valentina, easygoing son Joey (Asivak Koostachin), and a Mohican named Mukki (Eugene Brave Rock) represent the local population.

To become infatuated with one’s characters is the kind of virtue as instinctive as a sigh of contentment; but just as one risks boring friends with amazing descriptions of a lover, McGehee and Siegel relax prohibitions on tautness, allowing a 90-minute film to brush against the two-hour mark with one too many bawled recriminations exchanged while Lear-worthy lightning blazes across the heath — er, prairie. Its attention to indigenous politics does it credit, though: a well-paced negotiation between the siblings and Mukki hints at the class and racial tensions which result in a generations-long mistrust.

But the directors weave subtleties in: hints of Cal’s sexual tastes in the cuts to a photo on a lawyer’s desk of the latter and his boyfriend, references to his cat named Oscar Wilde, and in the loose exchanges with Ace, a character who dispenses wisdom and radiates tranquility like people of color, alas, often do in films like this. Montana Story doesn’t answer Cal’s question about his wretched pa: “How can someone so loved be so cruel?” Because no one can.

Portions of this review previously appeared in a Miami Film Festival recap.