As usual I avoid the obvious flops. Skewering prestige pictures strikes me as a more efficacious use of time.

4. All is True (Kenneth Branagh) 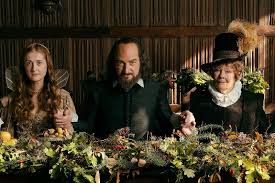 Kenneth Branagh as Shakespeare. “I thought ‘do no harm’ applied to films about great artists,” I wrote last May. “Desecrate the legacy if you must. Desecration takes courage. But for god’s sake don’t banalize the legacy.”

In which we learn there’s nothing a phony liberal pope (Jonathan Pryce) and a radically conservative predecessor (Anthony Hopkins) can’t hash out over ABBA and futbol.

“As Bombshell slouches toward its triumphant conclusion the weariness it induces courses through the bloodstream like lead poisoning,” I wrote in December. “These are loathsome people, and their loathsomeness is uninteresting: they’re well-coiffed slobbos whom you’re likely to hear echoed at Christmas dinner. I didn’t revel in their comeuppance, nor did I appreciate Roach’s attempts to jazz up his torpid material with inquisitional closeups and characters addressing the camera; it amounts to confetti tossed around the room. Kelly wasn’t a martyr: the network by whose rules she played eliminated her when she wouldn’t.”

Hitler Youth member Johann “Jojo” Betzler (Roman Griffin Davis) has an imaginary pal: Der Fuhrer himself, a buffoonish Adolf played by writer-director Taika Waititi. In the process of watching his country lose another world war He Learns About Himself. Obvious, patronizing, and ineptly staged, Jojo Rabbit isn’t offensive because it uses Nazis for comedy: it’s offensive because its jokes, performances, and situations use Nazism for sentimental purposes that an Academy of Motion Picture Arts and Sciences member would keep several boxes of Kleenex for.