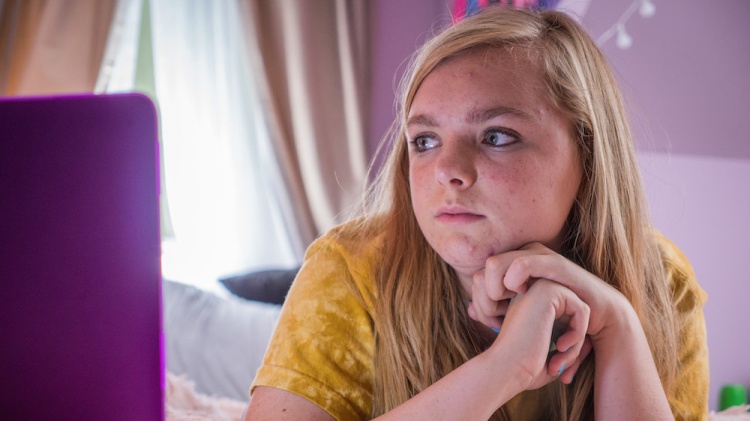 To be middle school is to live in fear, or, worse, to live in anticipation of fear. Many adults will look at Kayla Day and remember how, like her, they walked on the balls of their feet. In Eighth Grade, Kayla, played by Elsie Fisher in a performance of real charm, regards the world through slit eyes. Stepping gingerly down the hallways she’s like a small creature entering a grizzly bear cave. It gets worse. At a pool party, regarding raucous classmates in multicolored swimwear eating Doritos, she could be visiting an exotic aviary. Only when she films self-help videos for her YouTube channel is she as vivacious as she would like to be. Every time she punctuates the end of her broadcasts with an enthusiastic “GUCCI!” I wanted to applaud.

The central insight of writer-director Bo Burnham’s debut is how early we learn about the differences between our public and private selves. Kayla has a warm, patient, goofball of a dad (Josh Hamilton), but it’s not enough. Nor should it be. Kayla wants the cute mop- headed Alden (Luke Prael) to notice her. When the mom of popular girl Kennedy (Catherine Oliviere) invites her to the aforementioned pool party, Kennedy, sitting beside her in the car, can barely contain her contempt and boredom; she’s like a countess forced to show courtesies to a chambermaid. Yet Kayla won’t kiss her ass either. She’ll make Kennedy accept her kind of fun: instead of buying her a blouse, she opts for a card game (“like Go Fish, but more fun,” Kayla insists).

There’s not much plot in Eighth Grade, and how can there be? Yet I don’t want to overpraise the film. A few reviews have suggested that parents and their middle schoolers should watch the film together, but that’s a violation of the film’s spirit  – why the hell would you like a movie your mom and dad want you to see? If there’s anything eighth graders hate, it’s doing things for their own good. Eighth Grade is for the parents, once themselves eighth graders, and Burnham is skillful at going in and out of Kayla’s point of view; he takes her desires seriously, and his script and camera decisions don’t undercut her rare bursts of excitement. Decades of movies about teenagers have so conditioned audiences into expecting sudden cruelty that it’s refreshing when a high school senior (Emily Robinson) whom Kayla shadows as part of an orientation program genuinely thinks she’s cool enough to invite her to the mall to hang out and meet her friends (and educational for me: I thought teens stayed away from malls in 2018).

If Eighth Grade has a co-star worthy of Fisher, it’s her smartphone, like the beeper and the Walkman and television of earlier ages an inextricable part of the life of an adolescent but with the power to isolate or engage. When she cracks the screen after hurling it across the bedroom in a moment of embarrassment, it’s as if she breaks a Ming vase. I tremble at the thought of master’s theses citing Eighth Grade as an example of a Generation Isolated By Technology. The movie’s most harrowing scene would’ve been familiar to a flapper: a backseat encounter with an older boy that flirts with sexual assault. So too the character of Kayla’s dad. Hamilton, a minor actor from the nineties (With Honors, Kicking and Screaming), has the tentativeness of a former dude who hasn’t quite accepted the fact that a growing person depends on him; the jokes that might’ve cracked up his friends don’t work on a sulking thirteen-year-old. His would-be Oscar clip – a monologue in praise of Kayla as only a father to a daughter can – is treacly but tolerable. Anna Meredith’s obnoxious score, all synthesized bloops as if this were an Alex Garland joint, doesn’t help.

Honest about its insouciance, Eighth Grade understands how it helps to be a bit cock-eyed to survive middle school. Burnham’s characters aren’t afraid to be goofballs. I loved Kayla’s date with Jake Ryan’s Gabe, a nerd so indifferent to the impression he’s leaving that he attains a state of grace, especially when he generously points out to Kayla the variety of dipping sauces on-hand for the microwaved chicken nuggets he made. Parents may cringe during a scene when the kids complete a school shooting drill by crouching under their desks like the kids in the sixties did to survive nuclear annihilation, but they light up again when Alden, to whom Kayla has crawled in the hopes of wringing a response out of him, addresses the bullshit. Aren’t we glad we don’t have too many of these things? Kayla wonders. “I wish there were,” he growls.  School shootings >>> eighth grade. There you have it.