While I’ve been posting about missing cable and internet and running out of James Salter novels to read, seniors are dying from heat exhaustion. In Hollywood Hills about twenty miles north of me, Hurricane Irma claimed her highest death toll. And in what kind of facility were these seniors?

The Rehabilitation Center at Hollywood Hills has a health inspection rating of “much below average” by the Florida Agency for Healthcare Administration, which evaluates all long-term care facilities in the state for the U.S. government. The facility’s “overall rating,” which includes staffing, fire safety and health inspections, was was listed as “below average.”

The nursing home is owned by Larkin Community Hospital, which has a long history of running afoul of healthcare regulators. In 2006, the U.S. Justice Department fined Larkin and its owners $15.4 million in a settlement of a civil fraud complaint. The litigation named Jack Michel, a doctor who is listed in Florida healthcare records as an officer and board member of the nursing home with a controlling interest.

Florida is ripe fruit for charlatans and grifters. Besides its history as swampland requiring drainage and several hundred million in execrable real estate investments, the state also boasts a large senior population who no longer have a Claude Pepper in Congress to watch over their interests. Our governor, who has, I must admit, projected fortitude and command for the last ten days, ran a company responsible for the largest Medicaid fraud case in American history.

A sense of normality returns when you and your loved ones have power restored. The disaster recedes; the cans of Vienna sausage get moved to the back of the cabinet for Hurricane Jose and his successors; the #firstworldproblems, such as complaining about power restoration without the cable or internet returning, grows louder. Many of us — I include myself — were out of practice. The last time a major hurricane and South Florida shook hands the smartphone was a gleam in Steve Jobs’ eye, and unlike Wilma, Irma spun two hundred miles away. My parents had two generators, tested last week; they stopped working yesterday morning. I had a battery-operated radio, tested last week; it stopped working two hours before the power rent out on Sunday. No one in my building, including hardened Cubans, owned an appliance that wasn’t dependent on electricity. They sat in steaming, mephitic silence, presumably until the condo complex or relatives checked on them. A reminder, then, of how the comfort of technology becomes a noose.

Responsibilities don’t stop with the restoration of power. I spent the morning pouring water into Ziplock bags and freezing them for my parents, without ice and the generator’s welcome hum. Although the afternoons in the shade have been tolerable, I’ve seen what unlimited cans of Vienna sausage, the punishing Florida heat, and lukewarm Bud will do to a man in forty-eight hours. We need bars serving food and hair gel. We need people wearing shoes and shirts again.

9:24. Nevertheless, I blended my breakfast smoothie!

9:24 a.m. My battery-operated radio, which worked during its test run on Friday morning, won’t work. I’m fucked on that end.

9:18 a.m. After a couple drinks, I stuck earplugs in and went to bed at a quarter to eleven. I slept surprisingly soundly. The wind didn’t stop its mild howl. We’re getting 65-75 mph gusts. It should get worse late morning and early afternoon.

As anyone who’s lived through hurricanes understands, cabin fever is a problem. I didn’t have the attention span to expend on a new film, though. With The Departed endured and dismissed, I turned to All the President’s Men — I didn’t expect comfort food to be this tasty. 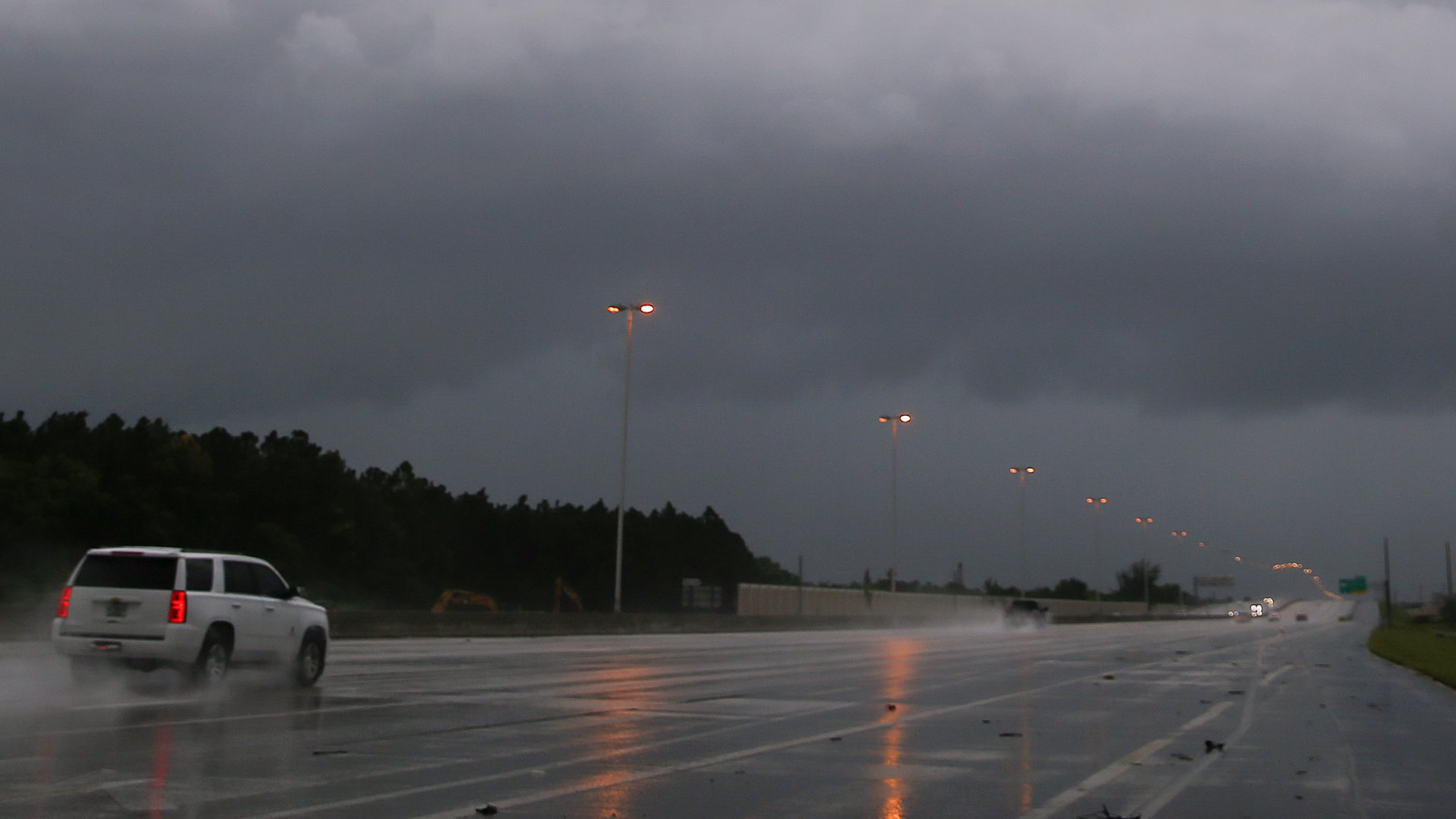 1. So here we are. News has improved for Miami-Dade and Broward counties. The forecast models have moved west, with Key West looking like ground zero. We will likely get sustained tropical storm force winds and occasional hurricane gusts, peaking tomorrow morning and early afternoon. Other than a second viewing of The Departed, I’m doing okay

2. Jack Nicholson is really fucking bad in The Departed.

3. In the hours before a storm, some neighbors will watch TV all day; others will do laundry.

4. Like Monet’s haystacks, I have caught the changing light in my apartment. A painter should capture the light’s gradations.

5. TV reporters hate those nature shots requiring them to stand in front of a palm tree and say, WHOA NELLY THE WINDS MUST BE BLOWING AT 25 MPH LOOK AT THOSE FRONDS WAVE IN THE WIND.

Hi! Here are this afternoon’s updates:

1. So! The trend’s looking slightly better for southeast Florida: Irma keeps inching west. Now the keys, Key West specifically, are in a bowl of shit. The west coast up through Tampa-St. Pete looks like it’s gonna get it.

2. Around 4 p.m. yesterday I felt the tightening of my stomach knot for the first time. I’ll be alone for the day and a half prelude and for the four to six hours between Hurricane Irma’s landfall and departure for points north. I might tell the regulars at my local Starbucks to crash here.

3. I cheated. As per Wednesday’s post, I’m reading The Presidency of George H.W. Bush. I skipped to the Hurricane Andrew farrago. Boy, do I remember. In retrospect, his “handling” of the aftermath wasn’t terrible by contemporary standards. Neither FEMA nor the federal government in general had dealt with this kind of catastrophe in decades (FEMA was a Carter-er innovation; did you know?). When Miami-Dade’s director of emergency services Kate Hale infamously asked, “Where the hell is the cavalry on this one?” the cavalry arrived in a couple days. That’s as far as I go — I wasn’t living in Homestead.

4. To eliminate perishables, supermarkets start cutting prices. If you’re not a vegan or vegetarian, you can buy a nice sized T-bone for less than $8.

5. This LCD Soundsystem album has not gotten fresher.

6. I heard Amy Grant’s “I Will Remember You” at Publix. 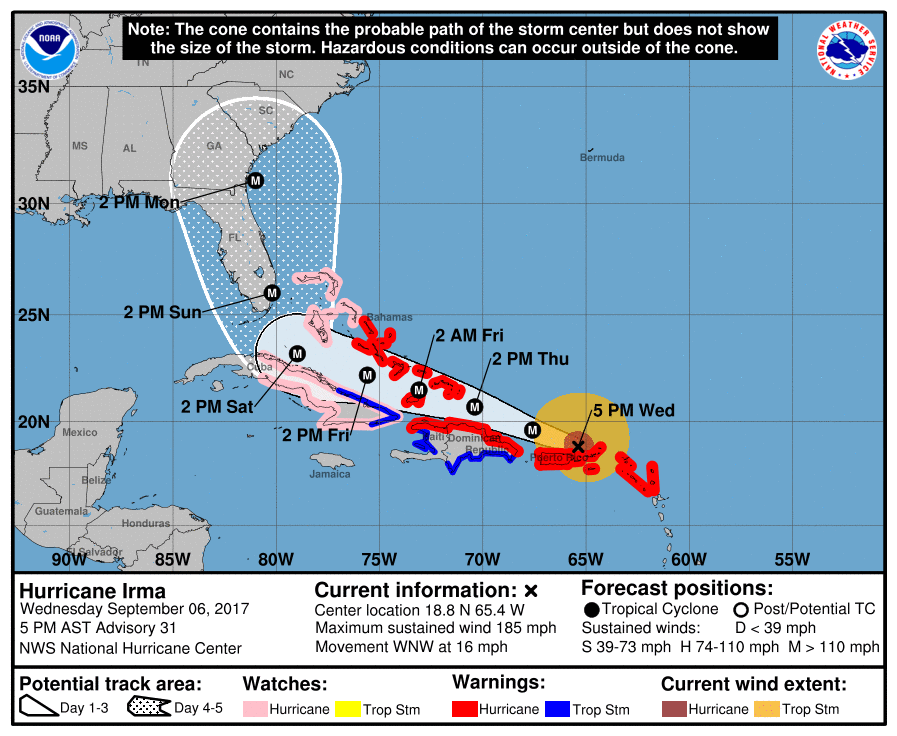 1. With school out and many businesses closing or about to close, streets are calmer. Governor Skeletor’s assurances about petrol availability have finally started paying off: every inoperative gas station yesterday was open today — with queues, rest assured, but at least customers could be assured a full tank between now and Saturday afternoon when steady tropical storm force winds begin.

2. Many of you ask, “Why the hell do we need huge Wells Fargo brick and mortar locations when most of our business is online?” Answer: occasions like this. Because I’m in the middle of renewing my passport, I had too many valuable documents around my apartment. I wasn’t the only person with dreams of visiting a safety deposit box. Ahead of me in the waiting area a woman a few years younger than me who arrived before I did pressed a shopping bag against her person. She had the caged look of a person kept waiting in the hot peach armchair since Hurricane Matthew. When her name was called, she catapulted herself into the vault. “We’ve gotten more visits today for safety deposit boxes [sic] today than for any other transaction,” explained the college-aged man whom Wells Fargo calls a “lobby leader,” serving the same function as the greeter with the iPad at a Disney hotel.

4. Waiting for me to finish them: cheerful fare like The Battle of Algiers and The Crime of Monsieur Lange.

5. Deciding that driving next week in a car whose oil filter registers 10 percent before it presumably self-deconstructs, I also took my car for an oil change. Braman Honda boasted a couple of hardy souls, one of whom looked, after a chat with a dealer, that he dreaded insurance payments more than Irma. In contrast to my bank experience, I waited barely forty-five minutes; I checked my phone once, sticking with my library copy of James Salter’s All That Is. As I’ve reported before, the expressions I see suggest reading a book in public is fascinating behavior akin to scratching one’s ear with a toe, but not, say, staring at and thumbing a electronic mobile device to watch cat videos. Before the smartphone era, we watched the numbing daytime television in car dealership waiting rooms across the land or delicately turned the stained pages of a Clinton-era issue of Good Housekeeping. I get it. But I’m not an animal!