The sun shines a little brighter on our peninsula when Florida Film Critics Circle awards films like Portrait of a Lady on Fire its Best Picture trophy. Portrait‘s Céline Sciamma also won Best Director. The organization, of which I’m a member, released other winners. I would’ve preferred Antonio Banderas or Adam Sandler, but that other Adam is a fine ringer. Whoopee for I Lost My Body in Best Animated Film — it’s why I love this crew.

Best Picture
Portrait of a Lady on Fire

Runner up: The Farewell

Best Director
Céline Sciamma, Portrait of a Lady on Fire

Runner up: Lulu Wang, The Farewell

Runner up: Steven Zaillian, The Irishman

Runner up: Claire Mathon, Portrait of a Lady on Fire

Best Art Direction/Production Design
Once Upon a Time in Hollywood

Runner up: No clear runner up

Best Foreign Language Film
Portrait of a Lady on Fire

Runner up: Lulu Wang, The Farewell

The usual tensions between wanting to recognize smaller over splashier fare manifested itself in the nominations by Florida Film Critics Circle, the organization to which I belong. Marriage Story led with the most nominations. I’m delighted to see Transit‘s Franz Rogowski and the enthusiasm for Céline Sciamma’s Portrait of a Lady on Fire, which hasn’t opened in South Florida.

Anthony Hopkins, The Two Popes
Brad Pitt, Once Upon a Time in Hollywood
Joe Pesci, The Irishman
John Lithgow, Bombshell
Tom Hanks, A Beautiful Day in the Neighborhood

After two days of deliberations, we picked our winners. END_OF_DOCUMENT_TOKEN_TO_BE_REPLACED

Florida Film Critics Circle, of which I’m a member, released its nominations for 2018’s best films of 2018 are out this afternoon. The Favourite leads with nine nominations. I contributed the following list. We announce winners on Friday.

Nicole Holofcener and Jeff Whitty — Can You Ever Forgive Me?
Lee Chang-dong — Burning
Lynne Ramsay — You Were Never Really Here

ANIMATED FEATURE
Mirai
Night is Short, Walk on Girl
Lu Over the Wall

dominating the final round of voting, The Shape of Water disappeared from night. The winner: Dunkirk, along with Best Director for Christopher Nolan. The rest:

Writer-director Greta Gerwig’s poignant coming-of-age drama Lady Bird came in as the runner-up. Best Director also went to Dunkirk, recognizing Christopher Nolan with Lady Bird’s Greta Gerwig again in second place. Writer/director Jordan Peele was recognized in the Best Original Screenplay and Best First Film categories for Get Out. Peele was also the runner up for the Pauline Kael Breakout Award. That prize was won by actor Timothée Chalamet, for his roles in Call Me by Your Name, Lady Bird and his brief turn in Hostiles.

But the film with the most awards this year was Blade Runner 2049. Denis Villeneuve’s technical marvel won four prizes – all in the craft categories: Best Cinematography, Best Art Direction/Production, Best Visual Effects and Best Score. Three Billboards Outside Ebbing, Missouri was recognized in two acting categories: The cast won Best Ensemble and Sam Rockwell won Best Supporting Actor. The Best Actress, according to FFCC voters, was Margot Robbie for her performance as embattled former figure skater Tonya Harding in the black comedy/biopic I, Tonya. That film also found representation in another acting category, Best Supporting Actress, for Allison Janey. Winning Best Actor was, once again, Chalamet, this time for his singular performance in Call Me by Your Name. That film also won Best Adapted Screenplay honors for James Ivory.

I did not, to be clear, expect these winners — I worried more about a last-minute surge for Gary Oldman’s Great Moments with Mister Churchill. Politics and so on. For Best Supporting Actor, I wish I’d voted for my nominee Barry Keogh for The Killing of a Sacred Deer, but politics, etc: I wanted Call Me By Your Name to get something. 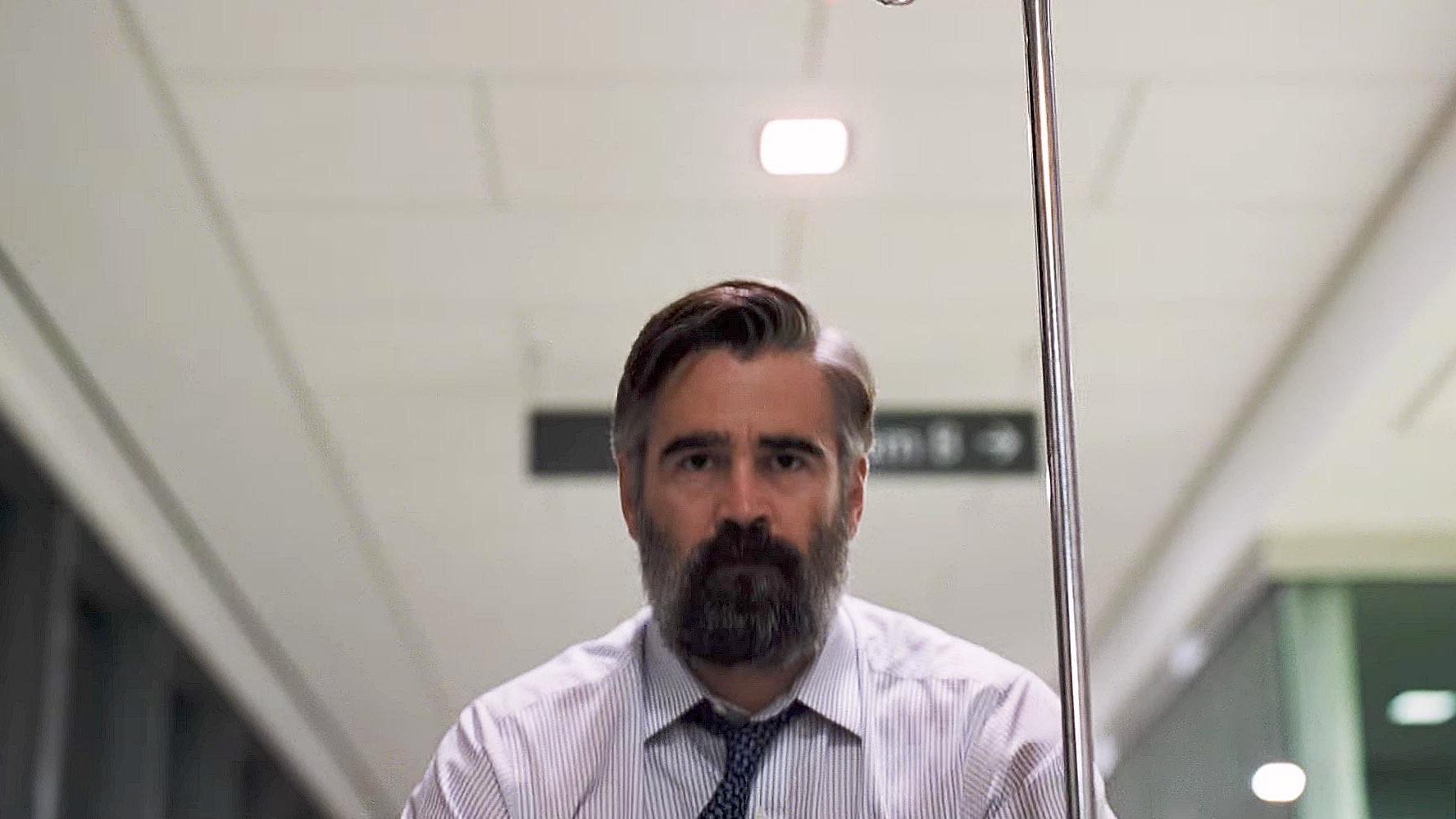 Yorgos Lanthimos makes movies about adults who don’t understand children. Or won’t. In The Killing of a Sacred Deer, the Greek director of Dogtooth, Alps, and The Lobster refines his deadpan presentation and brittle approach to gore to new heights in telling the story about a surgeon (Colin Farrell) whose meetings with the sixteen-year-old son of a man who died on his operating table result in calamity for his own two kids. END_OF_DOCUMENT_TOKEN_TO_BE_REPLACED

Too young for Wiseguy, I recognized Kevin Spacey as a formidable actor after watching him play an office manager with more cunning than his colorlessness would suggest in the film version of Glengarry Glenn Ross. I wasn’t sure he coded queer onscreen until he and Judy Davis spent ninety minutes bitching in 1994’s forgotten The Ref. Three films in 1995 cemented Spacey’s eminence as Weird Villain Du Jour: Swimming with Sharks, Se7en, and, most known, The Usual Suspects, for which he won the Oscar for Best Supporting Actor. Spacey specialized in a silken, literate menace familiar to Robert Vaughan fans. Two performances fed, lamprey-like, on the signals he sent to gay audiences. As the corrupt cop in L.A. Confidential, Spacey has a spasm of conscience after setting up a wannabe James Dean clone with a closeted assistant district attorney; although director Curtis Hanson shows Spacey dancing with a woman in his first scene, it’s too perfect, and the way Spacey plays it he puts distance between himself and her even if they would’ve sleeping together; it’s as if he’s watching himself while filing his nails. And in 1999’s American Beauty the actor allows himself to figure in a couple of sight gags that are the equivalent of the wink-wink references to secrets concealed he likes to make at award shows: neighbor Chris Cooper, playing yet another closeted man in a Spacey film, looks in horror from his window as his son Wes Bentley seems about to go down on the older man.

A leading man at last, Spacey thereafter stumbled. Like Susan Sarandon, an essential spring snapped in his acting brain the moment he won Best Actor; what came easily to him looked pantomimed. Again, gay audiences could understand the intentional nullity of a character and a performance such as the one played and given, respectively, in K-Pax; Spacey wasn’t good enough an actor to hide human feeling while at the same time quashing the queer notes, as the epistemology of the closet teaches us. Or perhaps he was good enough of an actor but not fearless enough. He didn’t get Kevin Spacey Roles again until House of Cards‘ Frank Underwood but too late: the memory of an instinctive malevolence clung to every gesture, neutering him. Better is the ring leader in Baby Driver, where Spacey figures out that, at this stage in his career, he can best show lust for another man onscreen by being as curt as possible.

By now the world knows what likely happened between Spacey and actor Anthony Rapp in 1986 when Rapp was fourteen. Spacey’s statement doesn’t deny it happened; he says he doesn’t remember it happening, which newspaper veterans will note is a non-denial denial. Michelangelo Signorile makes a couple of well-intentioned mistakes in his column denouncing Spacey. When Spacey wrote, “I choose down to live as a gay man,” Signorile scoffed, “This is the language of the enemies of LGBTQ equality, who claim homosexuality is a choice.” Choosing to live publicly as gay is a choice; indeed, choosing to come out is a choice. Nathaniel Rogers makes a point I’ve seen often:

Soon we’ll see the tired old hateful tropes come to play wherein LGBT enemies and ignorant media will equate homosexuality (which is neither good nor evil but just is… like heterosexuality) with predatory behavior and illegal activities like sex with minors.

After two weeks of revelations that have likely proved career-ending for Harvey Weinstein, Mark Halperin, and James Toback, I doubt the straight public will associate predatory behavior in which minors are targets as exclusively homosexual behavior. The Roy Moores thought we were evil before 2017. Let them think so and die.

A separate but related point: comporting oneself around the young remains a fraught topic in gay circles. The paranoia we feel is both one of the last vestiges of the closet and, I admit with regret, a necessary one. For terrified parents, how easy is it to think the predations of older men contaminated their sons. When I was eight, one of my grandmother’s closet friends, a married man who I learned years later led a double life with the wife’s consent, stopped visiting her home. We remain forever on guard around the young lest we provoke suspicions.

In a surprise move, The Lobster surged ahead of awards season frontrunners Moonlight, La La Land, and Manchester by the Sea to win Best Picture from Florida Film Critics Circle, of which I’m a member. Below are the winners, runners-up, and my votes.

An amusing feature length conceit, The Lobster is not a movie that will play well to octogenarian Academy members; it’s got no “narrative” to sell other than the fiendish working out of a conceit. It’s not by any stretch my favorite movie of 2016, but I’m delighted it won.

Both writer-directors exerted masterful control over visions that were theirs and theirs only, but The Lobster had no unmemorable songs I was stuck trying to remember.

I had no problem with Affleck’s excellent turn as the flinty, grief-allergic husband and father in Manchester by the Sea. While Joel Edgerton was less interesting as the more stolid half of the Loving couple, his angry simmer was a tonic.

If Isabelle Huppert had given her Elle performance on stage, I would have given her a standing ovation and whooped until the cops dragged me away.

Bridges was fine overacting his grizzled routine in the fine, grizzled Hell or High Water: it’s amazing how many years the long-gorgeous Bridges has held the grizzles at bay. When I want My Favorite Year-type emoting, though, I reward Ralph Fiennes’ hopped-up ex husband in the marvelous twaddle A Bigger Splash. What I wrote a few months ago: “The star is Fiennes, in whose performances I see no trace of the starchy colonizers he played in the nineties. As a sybarite, Fiennes has no equal; Harry would frighten Voldemort into exile again.”

Viola Davis’ already legendary work in Fences is duplicated in Denzel Washington’s adapation; I’ve got no problems with it besides category fraud. She is a lead actress, as anyone who knows film and play understands. In a year dotted with terrific renditions of queer desire, Lily Gladstone’s taciturn work in Kelly Reichardt’s Certain Women was the subtlest and most heart-wrenching.

The best film of the year you haven’t seen, American Honey understood the power dynamics of a young cast of amateurs: direct them as if they’re best friends for a day.

BEST ORIGINAL SCREENPLAY
The Lobster
Runner-Up: Manchester by the Sea
My Vote: The Lobster

In truth, Whit Stillman’s adaptation of Jane Austen juvenilia added and compressed the novel to such a degree that it qualifies as original.

One is made for TV, the other reckons with the legacy of cinema, both play like new peeks into familiar territory.

A surprise! Both choices more adventurous than what we’ve rewarded in recent years.

If Jason Bateman’s fox had been given the stop-motion treatment in Kubo, it would’ve been my film of the decade.

BEST FIRST FILM
The Edge of Seventeen
Runner-Up: The Witch