About this sweet land of liberty W.H. Auden, with whom I’ve been reacquainting myself, wrote in his preface to Henry James’ The American Scene: “Nature never intended human beings to live here.” Having finished Edward Mendelson’s superb poetic critical biography Later Auden, I can confirm the British poet, who became a naturalize American citizen, spent summers in Italy but not Florida; had he done so, this malarial backwater with its mephitic heat and dangerous animal life might have inspired the rewriting he was wont to do. Thanks to a new app, Floridians can see at what risk their properties are as sea levels rise. The results have proven, uh, auspicatory:

Currently, Flood Factor and FEMA data show about 1 in 5 Florida homes are in a special flood hazard area, where flood insurance is mandatory. Flood Factor predictions show that it could jump to 1 in 4 in the next 30 years. “It’s kind of a shocking statistic to think about,” said Jeremy Porter, First Street’s director of research and development. Within the next 30 years, Flood Factor data also show that more than 300,000 homes in Florida are almost certain to flood.

END_OF_DOCUMENT_TOKEN_TO_BE_REPLACED

Today I learned a term describing how a search for higher ground as sea levels rise pushes the poor out of neighborhoods. Laura Raim’s article on climate gentrification in Miami is a must-read. Grappling with a rise of nearly three inches since 1992, Florida lacks the dough to pay for the infrastructure essential to mitigating — forget about stopping — the catastrophe.

Frances Colón, a former member of the Climate Resilience Committee who is tasked with making recommendations to the City, said, “An enormous share of Miami’s budget, around 40 percent, comes from property tax. That’s where you see the absurdity of the system: The City is completely dependent on real estate and tourism, so it encourages building luxury hotels and apartments to get enough tax revenue to finance infrastructure to protect those same buildings.” The dependence on tourism also partly explains why Governor DeSantis waited so long before ordering a lockdown to halt the coronavirus, allowing tens of thousands of students on spring break to mass on the state’s beaches until early April and then go off to spread the virus across the country.

In the last two weeks of May, South Florida broke heat index records. Hurricanes become stronger faster. If I still breathe in 2050, I hope I can read Thomas Hardy from my beachfront condo on Orlando Beach.

If you’ve ever fried an egg on a Teflon pan, as I did last Tuesday, chances are you’ve got some levels of perfluorooctanoic acid in your bloodstream. Known as C8 for the number of carbon atoms strung together by scientists, this silent killer is responsible for cancers, deformities, and birth defects. A title card in Dark Waters, the new film by Todd Haynes, asserts that ninety-nine percent of humans have trace amounts of C8. In Parkersburg, West Virginia, it didn’t matter if you didn’t work for the DuPont plant responsible for most of the city’s employment; during the sixties and seventies, DuPont dumped C8 sludge into creeks and buried it in steel drums, contaminating the water enough to destroy generations of human and animal life. END_OF_DOCUMENT_TOKEN_TO_BE_REPLACED

Fed up by arguments for “moderate” climate change solutions from so-called moderate Democrats afraid of what the GOP would accuse them of being even if they worked for Big Oil, Vox‘s David Mitchell penetrates through the website’s usual semantic sobriety: END_OF_DOCUMENT_TOKEN_TO_BE_REPLACED

This story is encouraging: END_OF_DOCUMENT_TOKEN_TO_BE_REPLACED

To buy property in South Florida is folly, and here is more proof: END_OF_DOCUMENT_TOKEN_TO_BE_REPLACED

I don’t think I’ve defended my local votes before. But with early voting beginning on Monday, I want my readers to know what’s at stake. END_OF_DOCUMENT_TOKEN_TO_BE_REPLACED

As the remains of Florence dissipate in the northeastern United States, residents in towns like Garland, North Carolina reckon with their second bout of record-breaking flooding in two years. The Barnes family, for example, barely crawled out of Hurricane Matthew:

On Tuesday, Mr. Barnes, 42, and his wife, Brandy, 41, sat parked on what was now the water’s edge of Lisbon Bridge Road in Garland, some 60 miles inland from where Hurricane Florence had slugged ashore four days earlier.

They had lived in the house, just across the field from Mr. Barnes’s father, since 1996 and had never flooded out until Matthew. Mr. Barnes didn’t think twice about rebuilding after the 2016 storm, even though he said his flood insurance only covered about $25,000 of the damage. He paid out of pocket to get county approvals to raise the house and even put on an addition.

Mr. Barnes said he was denied a low-interest construction loan through the Federal Emergency Management Agency, so he borrowed money and drained the savings his family had built up after several good years running a local repair business.

“I replaced everything,” Mr. Barnes said.

Now, as he looked out at the waters and talked about boating home to check on the house, he said they did not know what to do.

Raising the house yet again would cost thousands. They had raised a son and a daughter there and did not want to leave. Their 16-year-old son, Mason, had been killed in a car crash just before Matthew. When the family had to flee again this month, the first thing their 11-year-old daughter asked her mother was: When can we go back?

Garland is about fifty miles southeast of Fayetteville; my North Carolinian friends will correct my geography. It’s inland. Yet these towns are no worse off for being away from sea level rise. Storms are getting bigger. They’re slowing down. They linger. No one is safe anymore.

And there I was thinking about investing in the beaches of Gainesville in 2075. 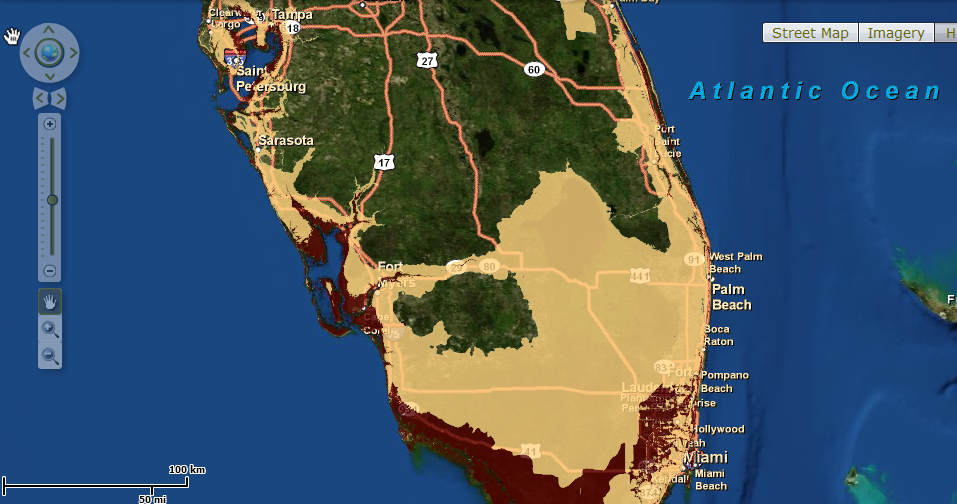 In an unprecedented bit of collaborating, the editorial boards of the three major South Florida newspapers published exhortations to their communities on Saturday warning about the immediate danger posed by sea level rise. More remarkably, they accept the consensus: there’s no stopping it; the hope is to gather business leaders and, uh, “innovators” and politicians in an attempt to make South Florida a place worth living after our grandchildren deal with effects more permanent than salt water in their toilets.

South Florida could become a world leader on resiliency — one whose engineering, architectural and public works projects steal the show from the Netherlands’ floating cities. Let us become famous for breakthrough marine research at our colleges and universities. Let us embrace the future — but plan for the future — knowing our region is going to look far different than it does today.

“It was a pretty miserable place to live 100 years ago, but people applied themselves and adapted to the land,” said Jim Murley, Miami-Dade’s chief resiliency officer. “It won’t be the same place, but it will be a place I think we can adapt to and have the kind of economy we’re talking about. But we have to stay on track, and use our universities and innovative capacity, because we’re going to need all those things to deal with the rising sea.”

State legislators are not known for their innovative capacity, especially not in a state that once thought South Florida meant Tampa; they’re notorious for skewing north because many attended University of Florida or Florida State. Guess which parts of Florida are least affected by sea level rise. Click on the map above. 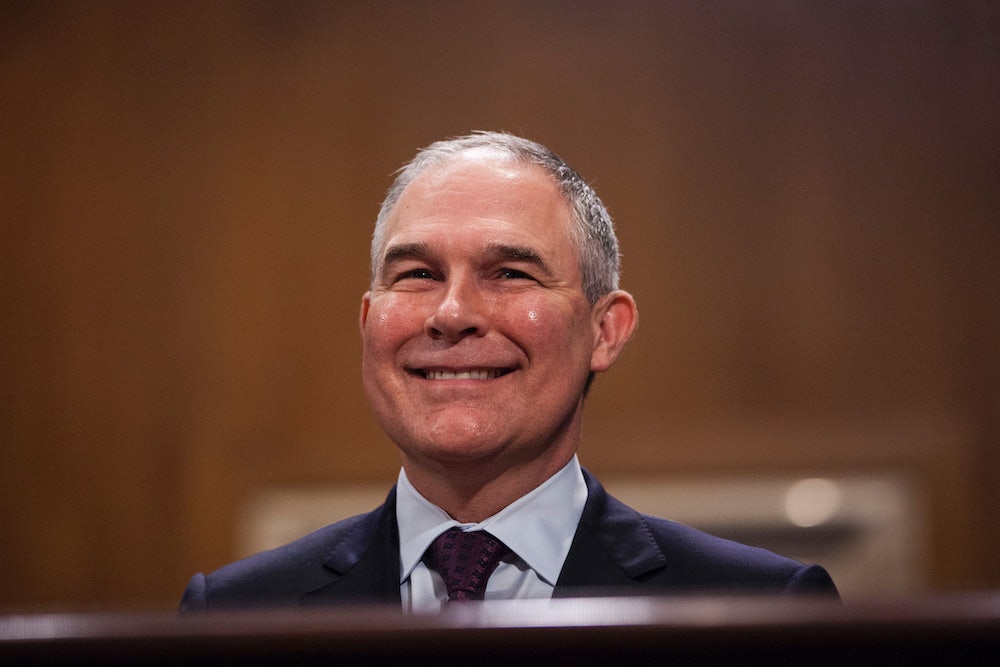 Alex Pareene on how Scott Pruitt, like many phenomena emerging from Trump’s DC, represents a culmination rather than an aberration:

So the problem is, the only difference between Pruitt’s corruption and the widespread corruption of nearly everyone else in Washington, in both parties, is the degree to which he is captured, not the form his corruption takes. Because being socially close to people representing industries seeking to influence the government, and then acting in ways that benefit those industries, and then receiving some sort of renumeration—a job or consulting gig or massively overinflated speaking fees or even just rides on a nice yacht—is basically How Things Work, and whenever you call it “corruption,” a lot of people very heatedly claim to be able to separate their personal or social lives from their political principles and professional obligations.

You see it clearly in the legal profession, as when ex-Attorney General Eric Holder returned to his massive corporate law firm, which kept his office empty for him during his stint in the Justice Department, to resume making millions of dollars working at a firm specializing in white collar defense for banks. There is Jesse Eisinger’s “Chickenshit Club,” which details how careerism in attorneys and—equally important—social pressures caused the Department of Justice to largely abandon the practice of holding corporate executives responsible for white collar crime.

The Beltway allows a harmless white collar kind of hypocrisy but stops short when the suspect picks their pockets.

Today’s New York Times has an account of how the GOP transformed from the party that got a Democratic Congress to sign the Clean Air Act into law and pushed for the Environmental Protection Agency became trollers pushing junk science: Until 2010, some Republicans ran ads in House and Senate races showing their support for green energy.

“After that, it disappeared from Republican ads,” said Tim Phillips, the president of Americans for Prosperity. “Part of that was the polling, and part of it was the visceral example of what happened to their colleagues who had done that.”

What happened was clear. Republicans who asserted support for climate change legislation or the seriousness of the climate threat saw their money dry up or, worse, a primary challenger arise.

“It told Republicans that we were serious,” Mr. Phillips said, “that we would spend some serious money against them.”

By the time Election Day 2010 arrived, 165 congressional members and candidates had signed Americans for Prosperity’s “No Climate Tax” pledge.

“The midterm election was a clear rejection of policies like the cap-and-trade energy taxes that threaten our still-fragile economy,” said James Valvo, then Americans for Prosperity’s government affairs director, in a statement issued the day after the November 2010 election. Eighty-three of the 92 new members of Congress had signed the pledge.

I don’t deny — see what I did there — that, as Jane Mayer’s Dark Money clarifies, the Kochs have the conviction of fanatics, but with green industry and natural gas making the profits that cap and trade bill defenders in 2010 could only point at and laugh, the only way to explain GOP intransigence is assholism. When I talk to climate science deniers about their views, these men (always men) aren’t Christians waiting for the angel to break the seals: they’re burgher types, solid guys who own their businesses or work for people who do. They don’t even believe scientists and leftists have formed a cabal. They don’t want to be told what to do by liberals. Nothing more. Like I wrote above, they troll the left.

Meanwhile this stupidity has consequences. My congressman, the impish and endangered Carlos Curbelo, has prominent quotes in the NYT article. Local politicians? Mushmouthed and craven.