I don’t have a good feel for how many readers watch cable news. I peek at “Morning” Joe and “Mika”‘s children’s entertainment hour a couple times a week to learn which way the winds of conventional wisdom will blow (this Monday’s CW: Bernie Sanders will win, Chris Matthews will choke on the word “McGovern”). Saner people nursed post-Superbowl hangovers and discussed Jennifer Lopez-Shakira instead of worrying what thousands of white people in Iowa will do. END_OF_DOCUMENT_TOKEN_TO_BE_REPLACED

Hours after her swearing-in as the new representative of Michigan’s 13th congressional district, Rashida Tlaib said the following to a crowd at a MoveOn event:

And when you’re son looks at you and says ‘mama, look you won, bullies don’t win.’ And I say ‘baby, they don’t’ because we’re gonna go in there and we’re gonna impeach the motherfucker.”

No sooner had these remarks gone viral that the Beltway pundit class’ brains oozed into their smoothies.  END_OF_DOCUMENT_TOKEN_TO_BE_REPLACED

In today’s New York Times, conservative columnist Ross Douthat pecked characters on a keyboard that after hours of cogitation first turned into sentences then cohered into paragraphs. Someone called it “Why We Miss the WASPs.” Let’s look at it together.

The nostalgia flowing since the passing of George H.W. Bush has many wellsprings: admiration for the World War II generation and its dying breed of warrior-politicians, the usual belated media affection for moderate Republicans, the contrast between the elder Bush’s foreign policy successes and the failures of his son, and the contrast between any honorable politician and the current occupant of the Oval Office.

The only people from whom nostalgia is flowing are the permanent occupiers of seats in cable talk show green rooms. The rest of us wondered why the hell a war with Iraq over Kuwait mattered and loathed George Bush’s AIDS policy, a generous word for an irritated improvisation.

Also in The Atlantic, Franklin Foer described “the subtext” of Bush nostalgia as a “fondness for a bygone institution known as the Establishment, hardened in the cold of New England boarding schools, acculturated by the late-night rituals of Skull and Bones, sent off to the world with a sense of noblesse oblige. For more than a century, this Establishment resided at the top of the American caste system. Now it is gone, and apparently people wish it weren’t.”

Ah, the nut graf. We live in an America increasingly dominated by minorities and one of Douthat’s paladin acquaintances implicitly admits he wishes it ain’t so.

Also in The Atlantic, Franklin Foer described “the subtext” of Bush nostalgia as a “fondness for a bygone institution known as the Establishment, hardened in the cold of New England boarding schools, acculturated by the late-night rituals of Skull and Bones, sent off to the world with a sense of noblesse oblige. For more than a century, this Establishment resided at the top of the American caste system. Now it is gone, and apparently people wish it weren’t.”

“What IS it about social media, the Freedom of Information Act, and Afghanistan and Iraq that makes these brown people so pushy?”

Put simply, Americans miss Bush because we miss the WASPs — because we feel, at some level, that their more meritocratic and diverse and secular successors rule us neither as wisely nor as well.

“We in Washington hate you.”

However, one of the lessons of the age of meritocracy is that building a more democratic and inclusive ruling class is harder than it looks, and even perhaps a contradiction in terms. You can get rid of the social registers and let women into your secret societies and privilege SATs over recommendations from the rector of Justin and the headmaster of Saint Grottlesex … and you still end up with something that is clearly a self-replicating upper class, a powerful elite, filling your schools and running your public institutions.

In the previous paragraph, he quotes Foer on Henry Adams, whom I suspect Foer has read and Douthat has not; in this one, he alludes to the late minor novelist Louis Auchincloss, who spent a half century painstakingly writing about the incestuous stupidity of the WASP culture revered by Douthat. At any rate, his insight: put women, blacks, gays, and your Mexican housekeeper in Andover and they might be as nearsighted as the Bushes.

So it’s possible to imagine adaptation rather than surrender as a different WASP strategy across the 1960s and 1970s. In such a world the establishment would have still admitted more blacks, Jews, Catholics and Hispanics (and more women) to its ranks … but it would have done so as a self-consciously elite-crafting strategy, rather than under the pseudo-democratic auspices of the SAT and the high school resume and the dubious ideal of “merit.” At the same time it would have retained both its historic religious faith (instead of exchanging Protestant rigor for a post-Christian Social Gospel and a soft pantheism) and its more self-denying culture (instead of letting all that wash away in the flood of boomer-era emotivism).

It’s de rigueur for liberals to lament the decline of the Rockefeller Republicans, or the compromises that a moderate northeastern WASP like George H.W. Bush made with Sunbelt populism.

But a WASP establishment that couldn’t muster the self-confidence to hold on to Yale and Harvard was never likely to maintain its hold on a mass political organization like the G.O.P. Whereas an establishment that still believed in its mission within its own ivied bastions might have been seen as more politically imposing in the wider world — instead of seeing its last paladin, a war hero and statesman in a grand American tradition, dismissed in the boomer era as a “wimp.”

The point of this counterfactual is not to just join the nostalgic chorus around Bush’s departure for the Great Kennebunkport in the Skies. Rather it’s to look forward, and to suggest that our current elite might someday be reformed — or simply replaced — through the imitation of the old establishment’s more pious and aristocratic spirit.

Imitating a pious and aristocratic spirit that hid essential truths from the American public and ruled as if, to cite a forgotten WASP scion, “the United States is practically sovereign on this continent, and its fiat is law.”

An excerpt from a boring defense of meritocracy follows. I can quote too, from P.G. Wodehouse’s The Imitable Jeeves: “You must meet old Rowbotham, Bertie. A delightful chap. Wants to massacre the bourgeoisie, sack Park Lane and disembowel the hereditary aristocracy. Well, nothing could be fairer than that, what?”

A few weeks ago I shared with students a couple of journal articles published in the 1980s lamenting the damage that USA Today would cause to journalism. Its sharp cheerful primary colors, reliance on graphics, and avoidance of long articles represented a bowdlerization of news — a rebuke to the intelligence of readers, according to these Serious Men. END_OF_DOCUMENT_TOKEN_TO_BE_REPLACED The ending of a political cycle doesn’t mean that reporters and pundits have retired the old clothes they’ve worn for two years and longer. At the cost of my health I exposed myself to four hours straight of cable news television because I’m compulsive about blogging as MSNBC’s Steve Kornacki is about correctly pronouncing county names.

Here are five of the worst political clichés this season:

3. “Not appealing to the middle.” Voters’ positions are a sour mishmash because unlike politicians they can’t pay the rent and for a focus group out of one check.

5. The quiet mourning of pundits, mostly white, for the death of the rural white Democratic voter. White voters will not leave Trump, and we should stop hoping so because they’re racists and our coalition doesn’t need them. Plus, they’re old and will die of emphysema and eating processed cheese. Fuck’em. I mean, why on earth would you want them leaving Trump? You think the separation will stop their racism? Many those racists voted for Obama. They were still racists.

“Morning” Joe and partner “Mika” Brzezinski is have evolved since the days when their MSNBC morning show turned into a Donald J. Trump telecenter in 2015-2016. They acknowledge the impacts of gerrymandering and James Comey’s FBI announcement on the 2016 election; they accept that the new Democratic coalition comprises women and people of color; they pay lip service to the environment; Scarborough gels his hair, keeps the sides shaved, and wears the occasionally chic sweater. Willie Geist, who looks like Michael Shannon playing Jason Isbell, has a quiet, mordant wit. END_OF_DOCUMENT_TOKEN_TO_BE_REPLACED 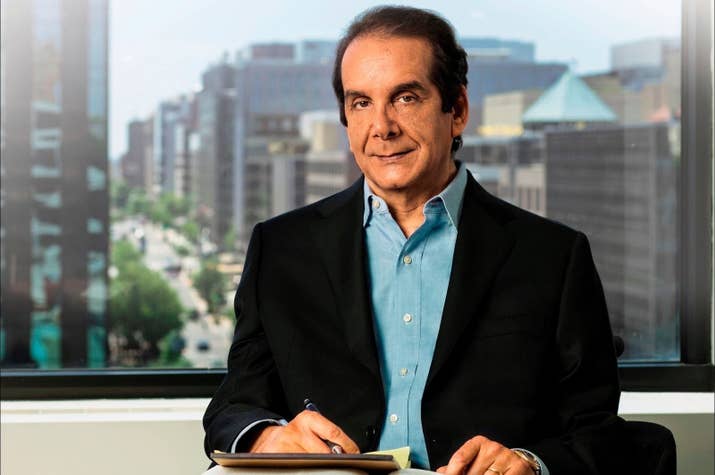 Wrong about Barack Obama. Wrong about “identity politics.” Wrong, most infamously and disgustingly, about Iraq. Men and women are dead because of Charles Krauthammer’s columns. They’re dead because Very Serious People in the Bush II White House read his bellicose columns in the aftermath of 9-11 and felt an ideological kinship. When Iraq was collapsing after the so-called “cakewalk” of the administration’s direst masturbatory fantasies, he offered a moist towel and balm in The Washington Post. END_OF_DOCUMENT_TOKEN_TO_BE_REPLACED