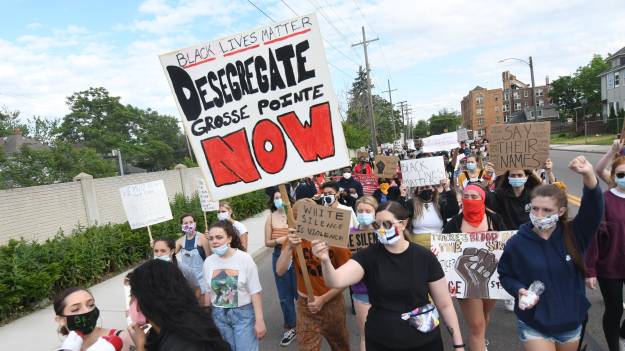 Few news outlets take the trouble to interview minorities; far easier, I suspect, to project stereotypes based on patterns of behavior and come to conclusions based on received wisdom. Talking to several people in what he calls “the upper crust of Black Detroit,” Tim Alberta learns how the death of George Floyd and the rise of Joe Biden have affected this community. The manner in which Floyd didn’t resist the asphyxiation unnerved them; Biden’s tired white guy schtik won’t fool them. As Eric Benjamin, an AT&T employee, notes, “I’ll vote for Biden. But it won’t matter. It’s never gonna matter who the president is. The cops are still gonna pull me over in my Cadillac and ask me, ‘How did you afford this car?’” END_OF_DOCUMENT_TOKEN_TO_BE_REPLACED

2.4 miles. A magic number — the number of miles I walked yesterday after lunch. Besides the noxious task of keeping illness at bay, noting my increased physical endurance has become part of my routine. Setbacks happen. On Monday I recorded my first class lecture on Zoom only to realize I hadn’t pressed “Record.” My student journalists have accustomed themselves to my stern admonitions against relying on technology during interviews — bring a notebook as well as your phone, etc. END_OF_DOCUMENT_TOKEN_TO_BE_REPLACED

Having watched Fail-Safe and Our Little Sister, I’ve earned this diversion. END_OF_DOCUMENT_TOKEN_TO_BE_REPLACED

I have no idea to what degree Sanders’ not being a Democrat prevented him from taking advantage of what pollsters I know call “the mechanics.” He had enthusiasm but no one to drive people to polls. These numbers in Michigan show a decline from 2016. I’m embarrassed. This is not Joseph Biden’s fault — it’s ours. We underestimated what the rest of the Democratic electorate who’s not a Biden fan wanted — and they swamped us. Sanders got the youth vote. They just aren’t enough. He needs the youth vote, the protest vote, suburban people, and, most importantly, the older black vote. He’s only got slivers of every vote except the older black vote. He failed, and it shocks me.

I’m on record as a fervent Warren supporter, with Sanders as a close second. I had serious doubts they’d win. Events have changed in the last 10 days. An epidemic has spooked people. The stock market looks like Publix totals on a Sunday night. What a difference since some pundits declared Trump formidable after the Senate acquitted him last month (last month!) Biden may lose in November; we may be marching to our doom, as I wrote last week. He still opens his mouth and looks amazed at the bats, robins, flies, and sparrows that fly out. After a life spent mocking presidents from Reagan onward for poor English, I’ve realized it doesn’t matter at all to many voters. But the odds were stacked against Sanders and Warren too because incumbency is powerful. Rather than get sad, rally against Trumpism. I’m in Florida, a POC, and queer — I don’t have time for this shit.

Reading Lil Loofbourow’s mournful appraisal of the Democratic race for the nomiination, I laughed as I bit my knuckles through until they bled:

Many are speculating—as if it would console or ameliorate the fact that the worst person for the job inexplicably got it—that Biden might appoint a competent woman of color for his vice president. It’s also true that this fight isn’t over; Sanders might claw back some support if his campaign manages to learn any lessons at all from the Super Tuesday results. But if it doesn’t, Biden is it: the least agile thinker, the least fluent talker to appear on that stage will run against an even more incompetent incumbent. If he wins, Biden will break the record for oldest man to be sworn in as president of the United States. (Donald Trump holds that title now.) If he loses to a president who has literally been impeached, it will be easy to see why: He’s in decline. Biden’s liabilities aren’t just the scorn with which he’s dismissed the concerns of the sizable demographic currently powering Sanders’ campaign, or his refusal to take seriously women’s discomfort at his massages and hair-smelling, or that he made up an outrageous lie about getting heroically arrested while trying to see Nelson Mandela; it’s that anyone who has watched Biden speak can attest to the fact that the man speaks in fragments that jostle into an agrammatical approximation of sense.

This after a field in which Kamala Harris, Cory Booker, and Julian Castro ran campaigns — flawed candidates but what else is new. Then there are Elizabeth Warren and the senior senator from Vermont, Bernie Sanders. END_OF_DOCUMENT_TOKEN_TO_BE_REPLACED

For a year I’ve spent uncounted hours reassuring and in some cases arguing in person or online about Bernie Sanders’ powers to woo the young and weave them into a formidable coalition. He’s learned since 2016, I said. END_OF_DOCUMENT_TOKEN_TO_BE_REPLACED

I voted today. Guess for whom. Nevertheless, I’ll vote for one of the decrepit, querulous late septuagenarians in November, don’t you worry. As Elizabeth Warren’s chances have diminished, so have my hopes. Whether she’ll fight this battle to the convention gates in a few months we’ll know soon, but a candidate as smart as she wouldn’t bumble, I assume, into that catastrophe. END_OF_DOCUMENT_TOKEN_TO_BE_REPLACED 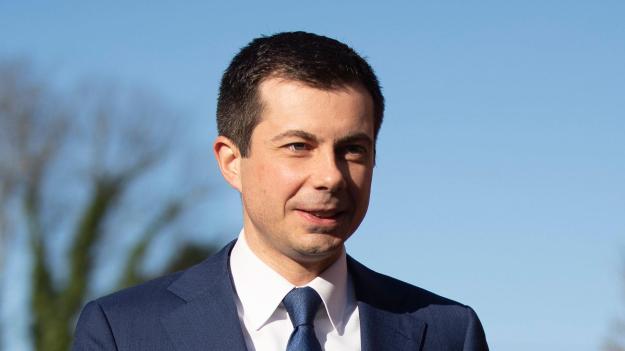 Loyal readers know I’ve said little about the former mayor of South Bend, Indiana. News of his withdrawal raises hopes he’ll run for governor in Mike Pence and Joe Donnelly’s state, not to mention Barack Obama’s in 2008. I have the mildest affection for an openly gay man who made it this far and endure Rush Limbaugh’s bullshit. END_OF_DOCUMENT_TOKEN_TO_BE_REPLACED

With the South Carolina primary imminent and Super Tuesday the occasion to shut off the remaining money spigots to the worst performing candidates, it makes sense to review the season. 2020 hasn’t been more nightmarish than 2016 or 2004 — we have fewer opportunities to tune out. END_OF_DOCUMENT_TOKEN_TO_BE_REPLACED

In the last few days I’ve watched South Florida Democrats, politicians and plebes, howl with despair over Senator Bernie Sanders’ defenses of the Cuban educational system on 60 Minutes. Here are the disavowals by my House representative and the rep in my neighboring district: END_OF_DOCUMENT_TOKEN_TO_BE_REPLACED

Sanders’s advantage in Nevada was overwhelming, with substantial leads in nearly every demographic group, allowing him to set down a marker in the first state with a significant share of nonwhite voters. Sanders expanded the electorate by attracting relatively large numbers of first-time caucus-goers, providing momentum as the race shifts into a critical stretch over the next 10 days.

He prevailed among those with college degrees and those without; those living in union and nonunion households; and in every age group except those over 65. He won more than half of Hispanic caucus-goers — almost four times as much support as his nearest rival, former vice president Joe Biden — and even narrowly prevailed among those who identified as moderate or conservative. Despite attacks on his health proposal by the powerful Culinary Union, he won in caucus sites filled with union members.

One state, of course, and using the blighted caucus system, but I cannot deny the magnitude of the victory. Even moderate Hispanic Dems voted for Sanders. END_OF_DOCUMENT_TOKEN_TO_BE_REPLACED 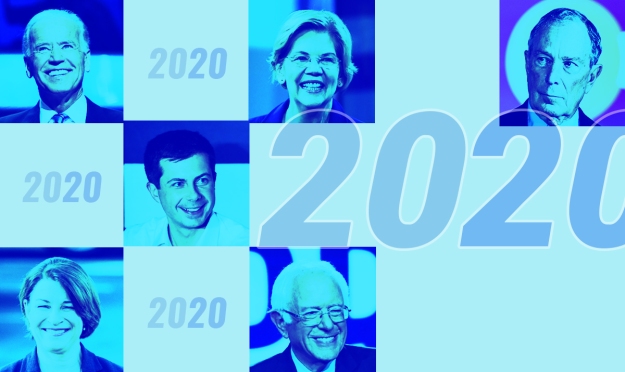 10:02 p.m. A steady, decent local journalist, Jon Ralston of The Nevada Independent‘s up next as interlocutor, asking about climate change and Nevada. Good on him. Biden, to his credit, responds immediately. “I believe in science,” Warren says.

9:54 p.m. I don’t drink Coke or eat potato chips but I’m gorging on this trivial bullshit.

9:48 p.m. I kept thinking because Beltway people love sports crap that Bloomberg was being underrated so he could defy expectations. I’m not sure how he can recover from Warren’s attacks and his poor responses. Calling “Morning” Joe to the rescue!

I’m not sure how he can recover from Warren’s attacks and his poor responses.

9:43 p.m. Warren’s response: “I hope you heard his defense: ‘I’ve been nice to some women.'” She insists on Bloomberg’s NDA policy.

9:40 p.m. Well. Bloomberg’s even worse than expected: snapping like a tortoise at moderators, getting defensive about his money, looking like a used condom in the glare of the lights.

9:38 p.m. Having wheezed enough about what he did to keep POC under scrutiny, Bloomberg sticks his head back into the tortoise shell.

9:36 p.m. “See how you’re doin’ compared to me,” Sanders throws back at the moderators about his healthcare. Well…his press secretary compared curiosity about a heart attack survivor’s medical records to birtherism.

9:34 p.m. About the MSNBC lighting: have you ever been sallow

9:32 p.m. “It targeted black and brown men from the beginning.” Elizabeth Warren explains the intent behind stop-and-frisk.

9:29 p.m. At last Bloomberg explains stop-and-frisk. He says it got “out of control.” Talking to “a bunch of kids” helped him reevaluate the crime rate. He sounds as if he regrets what we call the process instead of the consequences.

9:25 p.m. Warren’s attitude is to approach platforms as if she were a kindly but stern professor armed with a Sharpie.

9:14 p.m. I may not make it to the hour mark. Not because I hold an unsullied view of these things — go dirty, please! But nothing’s happening.

9:11 p.m. This is a bunch of bullshit — as usual. I feel filthy watching it. It’s gotcha questions about each other.

9:08 p.m. Sensing an opportunity to quash another white man, Joe Biden bulldozes vowels, crushes consonants, trips over periods — anything to stay ahead in the national stage.

9:06 p.m. Amy Klobuchar, voice shaking in earned righteous anger, spits back Bloomberg’s campaign memo purportedly saying women shouldn’t be onstage tonight. It has hurt him. He is trembling. He’s been coached about holding his temper.

9:02 p.m. “Mr. Bloomberg has policies in New York called Stop and Frisk. That is not the way to increase voter turnout,” Bernie Sanders says, truth bombing.

9:01 p.m. I’m a masochist. “Everything is on the line,” Lester Holt intones. Yes — I must start Thomas Bernhard’s Woodcutters, a novel that might’ve been read by former mayor Pete Buttigieg at most.