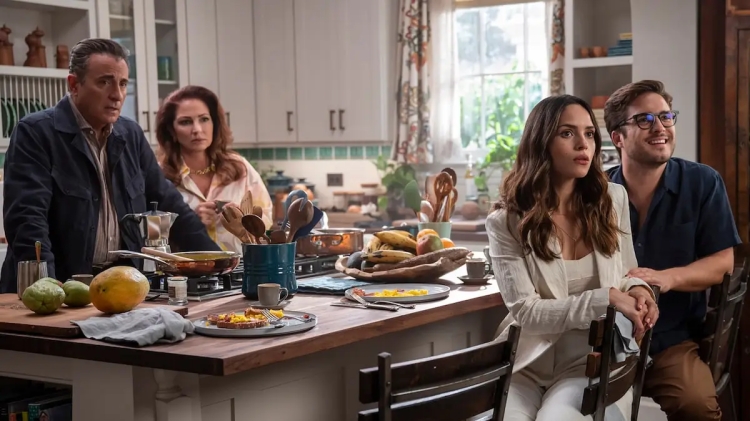 Forget the sops to liberal audiences: every version of Father of the Bride gleams with a confident conservatism. Vincente Minnelli’s beloved 1950 original, saved by Spencer Tracy’s wryness and the luminosity of Elizabeth Taylor, unfolds like a ponderous dinner party with sherry to start, lamb course with mint jelly and potatoes, brandy afterwards. The yuks-a-minute 1991 remake starring Steve Martin emphasized the star’s slapstick skills and a game supporting cast, perhaps because the bride is boring (Kimberly Williams will go on to marry country star Brad Paisley). What the films share is a complacency. No matter how ridiculous if not boorish and hostile Daddy might react to the sudden engagement of a beloved and nominally self-reliant daughter, His Heart’s in the Right Place. The jokes at his expense are meant to humanize him and reassure the audience: we know this is a useful fiction—okay, bullshit—in which viewers choose to believe.

Produced by HBO Max and Warner Brothers, the latest version transforms the mom and dad into a crusty, self-amused Cuban couple. When Andy Garcia and Gloria Estefan play the fractious couple, you ain’t getting anything else. An architect with a fabulous home, Billy Herrera (Garcia) can’t stop reminding anyone in earshot that he came from nothing, that his own wedding took place in a bingo hall; in this, screenwriter Matt Lopez and director Gaz Alazraki demonstrate they’ve studied homo cubanus, this species’ unique combination of imperiousness and bottomless self-pity. Ingrid (Estefan) has had enough: she wants out. When their NYC-educated lawyer daughter Sofia (Adria Arjona) announces she’s marrying Adan Castillo (Diego Boneto), Billy freaks out in that storied Father of the Bride lineage, especially when he learns why Sofia adores him: “He’s smart, he’s sweet, and he listens.”

More importantly: Adam is Mexican. As if to placate the modestly accommodationist politics of the Estefan clan, the decades-long enmity between the two countries—or, to be clear, the Cuban enmity toward the Mexican—remains a mere undertone, a semaphore intelligible to Miami Cubans. Adam’s ambition to work for a non-profit assisting immigrants crossing the border (undocumented Mexicans yet!), and a strong interest in a non-denominational marriage functions as its own signal: he embodies the FOX News host’s nightly punching bag, the latte-sipping libs contemptuous of tradition (despite Adam’s stated preference for tea over coffee). And while Billy is wealthy by Miami standards, Adan’s dad Hernan (Pedro Damian) is Jeffrey Epstein-level wealthy: a plutocrat who runs Mexico’s largest beer company, married a wife Sofia’s age, and has grown his hair out long enough to resemble Wayne Coyne. Hernan represents a threat to Billy’s filial pride: he’s supposed to pay for his daughter’s wedding, dammit, and Hernan’s looking for leverage by ordering hundreds of pounds of Waygu beef.

The film has a few inconsistencies recognizable to Miami audiences. To blow off steam, Billy goes to Domino Park, visited by no one but tourists and former Rough Riders, although the Miami-Dade Chamber of Commerce must’ve appreciated the plug. To show its allegiance to I Love Lucy stereotypes, Billy has to sleep on the couch because, presumably, a well-to-do architect wouldn’t have constructed spare bedrooms. Moreover, despite his connections, he doesn’t know that one can make a decent living working at a non-profit, nor that someone in his circles would have by now met tea-sipping yoga-loving Trump voters.

It takes a hurricane—as ever in South Florida—to save the pride of the Cuban-American male from the predations of wedding planners (Chloe Fineman). The performances save Father of the Bride itself. A blowhard in its thickly haired youth, Garcia gives his smolders and glowers a comic flair. Estefan is better than expected with the zingers, which Lopez’s script supplies on occasion, for example when the wedding planner, Natalie, says she learns about Latinx culture on an “incredible podcast with Drake talking about the immigrant experience.” Otherwise, the film suggests, nothing has changed since the Truman years. The bride and groom remain ciphers. The sanctity of gratuitous consumption remains unsullied.