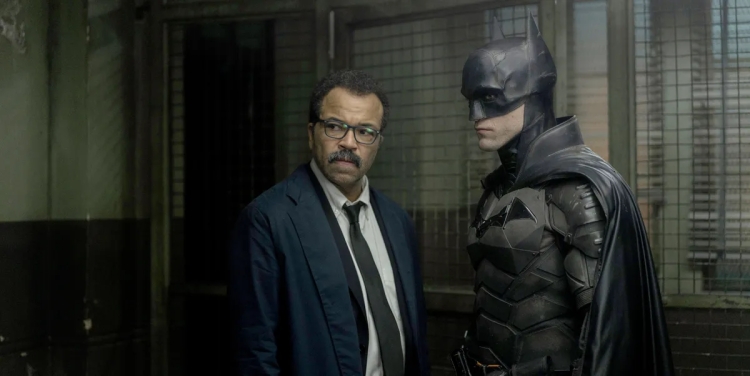 Among actors who have donned a nipple-giddy iteration of the iconic suit, Robert Pattinson ranks with Michael Keaton and Val Kilmer as the Batman with a mouth as pillowy as sushi-ready bluefish tuna. I should’ve written The Batman, as the latest attempt to rewrite thirty years of film history insists we call the most sullen modern superhero. The audience sees a lot of Pattinson’s mouth, some of his brain, and none of his weaselly grace. To call The Batman “dark” is like calling mayo gross; by comparison, Christopher Nolan’s own movies are Tootsie. It has a glum certainty. Every wrinkle is as preordained as tragedy but without the resonances. And, oh, you know it’s long?

And also wet. Writer-director Matt Reeves (Cloverfield, Dawn of the Planet of the Apes) must have situated Gotham at the same latitude and longitude as Manila. It never stops raining. The sun is a dream in the eye of God. Youngish Bruce Wayne (Pattinson) collaborates with Gotham City Police Department’s Lieutenant Gordon (Jeffrey Wright) to solve the murder of a mayoral candidate at the hands of The Riddler (Paul Dano), who leaves the sort of cryptic jokes too clever for criminal masterminds in our world but occasion as many scowls and volleyed theorizing as MIT grad students over differential equations. An abandoned thumb drive leads them to a nightclub operated by Carmine Falcone (John Turturro), a mob boss akin to Marvel’s Kingpin but with the added moral crinkle of being an intimate of the Wayne family. The Batman also meets Selina Kyle (Zoë Kravitz), a drug dealer who moonlights as Catwoman; also, Falcone’s henchman Penguin (Colin Farrell), bearing no traces of avian birth, lusts, or affiliations.

The Batman‘s narrative isn’t complicated but it’s not worth untangling, nor are the billions of consumers who have made it a global smash concerned with who did what to whom. To them, the obstinate weltschmerz on which Batman as comic, brand, and personage depends justifies their generations-long reverence for the tormented pretty boy loved unrequitedly and without reservation by his manservant Alfred (Andy Serkis here, a dead ringer for Brendan Gleeson). Like Nolan’s The Dark Knight (2008), The Batman regards humor as an affront, but, again, audiences know one shouldn’t fart in a temple. Reeves’ method is to let his camera drool over the characters, despite the credits listing William Hoy and Tyler Nelson as editors; most scenes run at least a couple minutes past their climaxes (if Reeves were at a gay bar a bartender would question him for ogling the boys without so much as a blink). So long as Alfred, the cool bat cables and cape and shit, and the Bat-Signal are in place, we’re ready to go, although, really, it’s 2022 and The Batman and Gordon rely on a signal? Couldn’t they text each other? What if The Batman was in the bathroom blasting Imagine Dragons?

A noble example of an actor whose stint in a huge series as a teen could’ve buried him alive, Pattinson has made a number of script choices (The Lost City of Z, Good Time, The Lighthouse) that prove him a risk-taking, inquisitive performer. Accepting this part is a no-brainer: beyond re-establishing his commercial bonafides, he endears himself to viewers who regard Batman as theatergoers do Hamlet: a palimpsest ready for the next talent. He doesn’t do more than mush that mouth and ignore the bangs that sag over his unmasked puffy face, though. I’ve read criticism that Wright reveals his limitations by speaking in the same monotone as Pattison. Never mind how well they harmonize — a Dirgey Duo. Wright has in the last eight months demonstrated his lyrical power as the only soulful person in The French Dispatch, so he has earned the right to cruise. Reveling in an interpretation that owes a little to Danny De Vito and a lot to Robert De Niro as Al Capone, an unrecognizable Farrell gives the movie a zing whenever he appears. Turturro is even better. Falcone talks slow because he can; so enmeshed is he in his corruption that all he has to do is raise an eyebrow and people die. As The Riddler, the often deplorable Dano for once puts his shrieky Weezer-character unpleasantness to shrewd use. The most confident female inhabitant of this bro world since Michelle Pfeiffer’s own turn as Catwoman, Kravitz has gravitas. She stares at The Batman as if he were an object of desire, and because she felt it I did too. She nails one of the script’s few laugh lines: she wonders if she and The Batman couldn’t be a team, you know, “knock off some hedge fund types.” Otherwise Reeves and co-writer Peter Craig’s script settles on dollar-book Churchill (“The power to endure, and the strength to fight,” that sort of thing)

If the film is heavyhanded, it is on occasion, movingly heavyhanded; seeing the machinery at work shouldn’t keep you from admiring its functions and effects. Reeves includes two scenes of a now orphaned boy, isolated in one-shot; Wayne/Batman regards him, while the doomy chords of Nirvana’s “Something in the Way” unfurl non-diegetically. There’s no missing the significance: The Batman, orphaned himself, feels a kinship. But the song is unexpected, and, importantly, the scenes don’t advance the plot so much as provide a symbolic timeout from the overall lugubriousness. The last hour, consisting of key characters explaining the Depth of Gotham’s Corruption while The Batman seethes, sure needs the reprieves. I found The Batman a tendentious bore, but it hardly matters: Pattinson’s in for the next one. Faulting a movie for adhering, mercilessly, to its intentions is unfair to its makers; reflecting on my indifference is my responsibility.