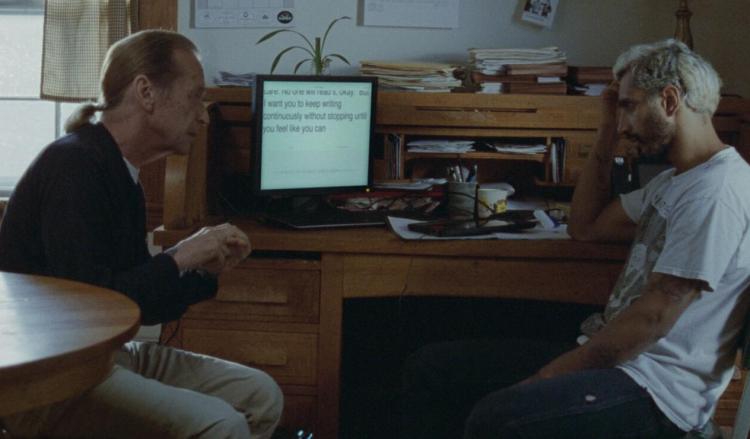 From a pre-title sequence at a concert to an establishing shot inside a trailer, Sound of Metal understands how the adrenalized rush of performance must yield to normality. A recovering addict, Ruben (Riz Ahmed) had trouble with this transition. But from its opening minutes director Darius Marder disorients the audience. Making breakfast for girlfriend and bandmate Lou (Olivia Cooke) is almost creepily normal. Eventually Ruben, drummer for metal duo Blackgammon, realizes the toll that years of loud music has exacted on his hearing. Working from a script by Marder and Derek Cianfrance (Blue Valentine, The Place Beyond the Pines), Sound of Metal depicts, often pedantically, the spiritual wear on an aging man who thought he had figured stuff out and now must drastically change his life.

When a doctor is firm about Ruben’s dwindling chances to recover lost hearing, Ruben hangs on to cochlear implants as the solution. Because we live in America, where health care is a privilege for the rich and penury or death the right of the poor, this operation may cost as much as $80,000 — out of reach for an act that loads up its own merch in a trailer home (Lou and Ruben park their RV for the night in shopping center parking lots). His NA sponsor recommends a place for Deaf recovering addicts run by Joe (Paul Raci). An accomplished lip reader whose etched face has, paradoxically, the blankness particular to Americans, Joe, as played by Raci sporting a grim salt-and-pepper ponytail, is a no-bullshit character who has seen Rubens before and will see many more. To concentrate his new boarder’s faculties, Joe often locks him in a room with pencil and paper. Just write. Don’t stop. Accustoming himself to this new life means stepping beyond his, thus the sympathetic way in which Ruben teaches Deaf children at a nearby school.

For the sake of giving audiences a hint of the world of hisses, faint bumps, and outright silence in which Ruben lives, Marder and sound editor Nicolas Becker will dim the sound during fraught moments. Sometimes they take to it like children playing with light switches — a dinner scene with Ruben’s colleagues gets the sound restored abruptly; we hear voices louder than normal, lips smacking on food, the clatter of plates. Thanks to these moments, I had a discomfiting experience watching Sound of Metal, I must admit. I’ve seen too many films about people with disabilities whose good intentions mutate into the inevitable histrionics of directors and actors who want recognition for playing — at worst imitating — these people. There is if not a cruelty then a meretriciousness to even decent to good films like My Left Foot and The Shape of You. We expect the actor to show off, to thrill us with his or her diligence. In life, a person with a developmental problem will insist on being treated like everyone else; once Dustin Hoffman or Tom Hanks plays him, he can never be ordinary again.

In an attempt to inoculate itself against these charges, Sound of Metal includes a scene in which Joe rebukes Ruben for wanting to treat the deafness as a problem requiring a solution. Live with it, Joe suggests. The Deaf children whom Ruben has grown fond of? No one should consider them victims. But he sells his gear to pay for the implants anyway. They are far from ideal: he hears feedback and scratches that Marder renders as if switching from one rural AM station to another. Ahmed’s wide eyes and ability to find the shading between the hangdog and the doleful serves him well in this section of the picture. We need it, for Sound of Metal takes a surprise, tedious turn when Mathieu Amalric (!) appears as Lou’s father, a musician himself who in true Amalric fashion can’t exist without a glass of fine spirits in hand. More touching: a final sequence in which Ruben stops steeling himself for silence and starts enjoying it.

Sound of Metal is streaming on Amazon Prime.