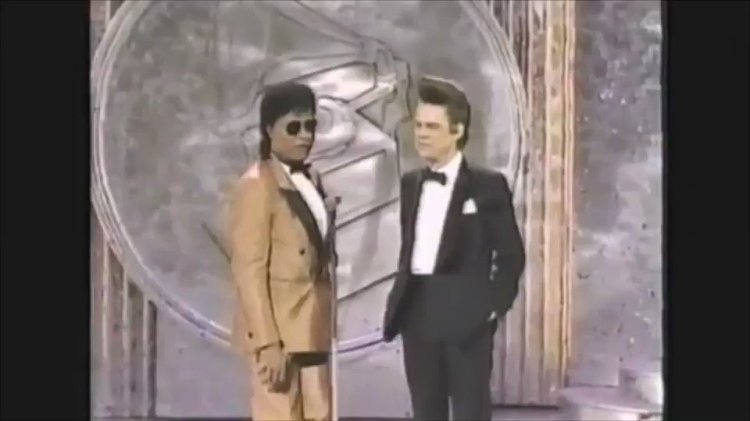 The only person who could upstage Buster Poindexter in 1988 was the late Richard Penniman. Recruited to present the Best New Artist Grammy, an increasingly mortified and impatient Buster watches as Little Richard shames the worldwide audience for treating him as a has-been.

“I have never received nuthin’,” he said, voice rising to a gospel pitch. “Ya’ll ain’t never give me no GRAMMY. And I’ve been singing for years. I am the architect of rock and roll!”

I suspect winner Jody Watley, backstage, thought this marvelous preamble worth the suspense. So too the crowd of musicians and bizzers, who led by Michael Jackson applauded and smiled with what looked like genuine enthusiasm (and embarrassment). Hell, if that’s Miles Davis at 1:21, then Richard was even more impressive: he put a grin on Miles Davis’ face.

Grammy producers, in their limitless vulgarity, must have slapped their knees and giggled, “Buster’s weird, right? Let’s put him on stage with Little Richard!” Watching him night, I experienced the unwelcome tingle familiar to me from glimpses of George Michael in Wham! and newly solo. Later I’d come to know this phenomenon as a reaction to Queer in Plain Sight: a portal through which I saw a performer’s gender and sexual non-conformity that doubled as a mirror in which I recognized myself. The piano was an expression of — an extension of — his sexuality. He doesn’t “play” in a conventional sense: he fucks it. Therefore, it is “play” in its denotative sense. His interviews are mincing wonders.

To be a queer person of color is to witness how the aggressive sexuality ascribed to us over centuries frightens regular people when it isn’t heterosexual; we’re not dangerous anymore, we’re just scary. Scary they can dismiss. Richard understood this, as the frequency with which he expiated for his venal sins in church. These visits replenished him too. The urge to immolate himself, a constant in those two decades after the late fifties heyday, doubled as another performance. Frightened of this spectacle, the biz limited him to Down and Out in Beverly Hills and the oldies and award circuit. Fires are spectacles.