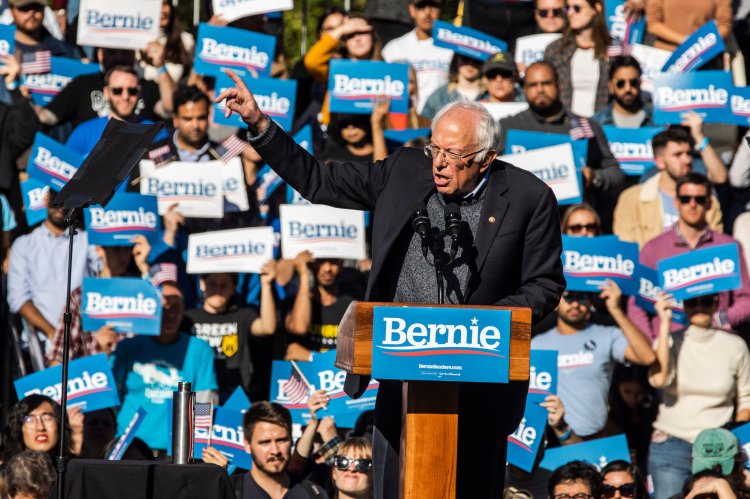 “[Bernie] Sanders is more banal than people think,” Vox‘s Matthew Yglesias writes in a surprising endorsement of the Vermont senator’s presidential campaign – surprising when remembering Yglesias as the voice of Democratic reasonableness. Perhaps this explains his stressing of Sanders’ banality.

Most of the fears about Sanders expressed by Democratic insiders — fears that have trickled into much of the mainstream media coverage of his campaign — are better understood as disputes with his followers than as real problems with the man himself.

His extremely online loyalists (themselves only a minority of his supporters, as with any candidate) tend to be both highly ideological and highly antagonistic. Some, including younger supporters, seem to lack a broader perspective on events. They are unrealistically optimistic about what a Sanders administration could achieve, unreasonably down on Sanders’s rivals, and simply lack appreciation of how small the differences within the Democratic field are, especially compared with the gaping void between essentially all Democrats and all Republicans under modern polarized conditions.

That said, a primary is about picking a nominee, not about picking whose cheering chorus you find most congenial on Twitter. Sanders has good ideas on the topics in which the choice between Democrats matters most, he has a plausible electability case, he’s been a pragmatic and reasonably effective legislator, and his nomination is, by far, the best way to put toxic infighting to rest and bring the rising cohort of left-wing young people into the tent — for both the 2020 campaign and the long-term future.

My opinions are well known. Sanders was too old last year. He is older this year. Nevertheless, he remained my #2 without competition, and the swiftness with which he recovered from a heart attack more of his fans should worry about impressed me. He also seems lighter on his feet. The Trump administration’s insouciance about assassinating Iranian officials served as a reminder that the Middle East remains a quagmire of bipartisan depths. Despite the insistence with which pundits have said the Boy Mayor and Warren have excellent “ground game” in Iowa, it’s Sanders who has seen record small donations and a consequent rise in polling. He forced me to give him a fourth look, damn him.