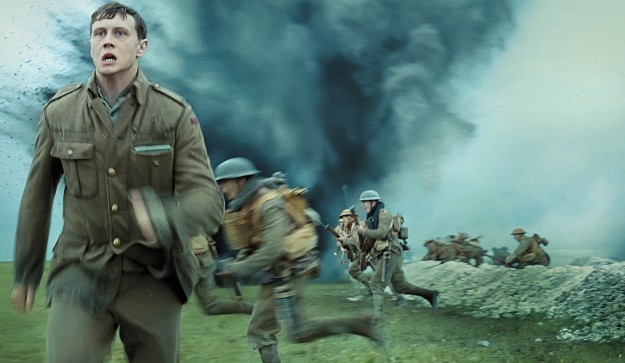 An ideological muddle has made World War I a blank slate for novelists (Pat Barker) and now directors. As there would be twenty-five years later, Allied powers fought a German-led coalition, but without a Hitler or Mussolini as bugaboo what remains is an abstracted horror, a senselessness that scarred a generation. If a series of accidents connected to alliances led to inevitabilities — historians remain divided — then the four years look like the most egregious spilling of blood in history. We remember the victims, not the men in power; Clemenceau, Lloyd George, and Woodrow Wilson do not dwell in the public imagination, for better or worse (often worse), than FDR, Churchill, and Stalin do. The poetry of Wilfred Owen and Siegfried Sassoon remains as testaments to the terror of trench warfare, in which the machine gun felled thousands of young men like mowed wheat, all for the sake of gaining a few feet of ground.

These prefatory comments are necessary when watching 1917, Sam Mendes’ film about events that happened on April 6 that year concerning Operation Alberich. In northern France, British command has ordered Lance Corporals Schofield (George MacKay) and Blake (Dean-Charles Chapman) to deliver a message to the 2nd Battalion of the Devonshire Regiment. A planned British attack will play into German lines: the Germans will feign a retreat before a devastating ambush. This means the soldiers must traverse no-man’s land. Complicating matters: Blake’s brother, a lieutenant, fights among them. Thanks to Roger Deakins’ use of the continuous take, Blake and Schofield’s journey across the battle-scarred French countryside plays like Frodo and Sam’s trek through Middle Earth; Schofield even finds France’s version of the Dead Marshes at a corpse-strewn river.

And that’s it. Other than Blake sharing an autobiographical anecdote, Mendes and
Krysty Wilson-Cairns’ script keeps the soldiers as ciphers. 1917‘s suspense inspires is strictly of The Fugitive kind. The men scurry through trenches, endure enemy fire, set off a tripwire, and almost get hit by an enemy plane. Depending on film’s collective history of Great War pictures, Mendes is free to simulate his own pathos. Late in the picture Schofield establishes a tentative connection between a peasant woman and her child, much like Jean Gabin did in Grand Illusion. “Three years of fighting for this?” says one disillusioned British soldier straight out of the All’s Quiet on the Western Front manual, gesturing to the dullest of green fields, for which they’re grateful: no one wants to it disfigured by potholes and scorched earth.

Thanks to Mendes’ approach, critics will praise 1917 for its realism. This is a mistake. Presenting gore and moments of sentimentality in the same shot is Mendes’ hallmark: Schofield tumbles into a mighty river and sees white petals floating on the surface while Thomas Newman’s score digs like a bayonet into the audience’s chest. A literalist with no confidence in filmmaking, Mendes (American Beauty, Road to Perdition) relies on the continuous take as the latest in his bag of gimmicks. When he trusts behavior, the film breathes faintly: after cutting his hand on barbed wire, Schofield sticks it accidentally in a bloody rat-infested hole; the camera captures the horror he has to quash for Blake’s benefit (if he survives he may die of blood poisoning). Other than these sequences when Deakins and Mendes illuminate George MacKay’s drawn, pale mien as if he were Falconetti’s Joan of Arc at the stake, and a sardonic cameo by Benedict Cumberbatch as Colonel Mackenzie (Cumberbatch gets the film’s best exit line), 1917 has no resonance.

9 thoughts on “Beyond a filmmaking gimmick, ‘1917’ has no resonance”