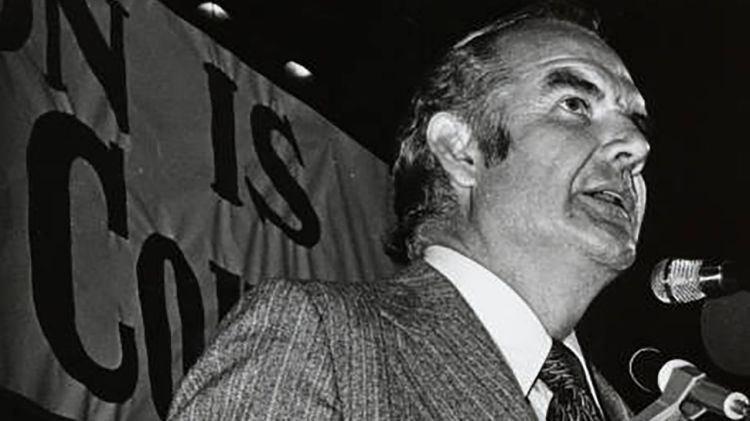 As 2020 and the Iowa caucus get closer, expect to see Rahm Emmanuel and Claire McCaskill types bemoan the leftward lurch of the Democratic Party. Expect allusions to George McGovern, whom the Democratic candidate establishment despises more than the GOP as an Eeyore, a symbol of failure as profound as the substitution of Swanson’s English Style Fish ‘n’ Chops for edible cuisine. “The more you look at him, the more George McGovern is an unfairly maligned figure of Democratic failure, whose actual failures are not relevant to any 2020 nominee of his party,” Ed Kilgore writes.

Yes, many Baby Boomer Democrats will always be haunted by Election Night 1972, when their ancient enemy Tricky Dick won New York, California, Michigan, and McGovern’s own South Dakota – just as millennial Democrats will never forget HRC’s shocking 2016 defeat. Neither defeat offers any clear guidance for 2020, truth be told. But 1972 is about as illustrative of what to do or not do as 1928 or maybe the Battle of Agincourt.

Among Kilgore’s five theses, two stand out. First, the New Deal coalition cracked not in 1972,  but in 1968, when Richard Nixon and Democratic racists winked and elbowed each other in what became known as the Southern Strategy.

Most importantly, Richard Nixon’s reelection campaign kept men on its payroll whose duties included sabotaging the Democratic primaries It’s as if the establishment hasn’t read Rich Perlstein’s Nixonland or isn’t aware that they can stream All the President’s Men on Netflix. Specialists in ratfucking, Donald Segretti and Jeb Stuart Magruder sowed discord among Democratic primary voters, aided unofficially by the likes of Hubert Humphrey, whose campaign ads in Florida, to take one sordid example cited by Perlstein, announced that the former vice president was “the people’s Democrat…will stop the flow of your tax dollars to lazy welfare chiselers.” Thus did the Democrats’ 1968 standard bearer sully his own noble liberal history by precipitating Ronald Reagan’s line of attack in 1976 and 1980. Indeed, the Democratic solons did as much to sabotage the McGovern campaign as Nixon did. “McGovern’s was the only viable campaign [the Nixon operatives] didn’t sabotage, because they thought he’d be easiest to beat in November,” Perlstein notes, or, as Hal Holbrook’s Deep Throat reminds naif Bob Woodward, “They wanted to run against McGovern. Look who they’re running against.”

These myths have obscured the essential truth about McGovern, the so-called candidate of acid, amnesty, and abortion: he wasn’t any more liberal than Lyndon Baines Johnson, who even accounting for the cohesion of the New Deal coalition won 61.1% of the popular vote eight years earlier. To imagine the Democrats blowing it in 2020 breaks no gaskets, but to assume that they’ll lose nominating the most liberal candidate plays into the hands of a credulous Beltway news press that has taken its cues from the GOP since….1972. Nominating the “safer” candidate guarantees no victory either, as Presidents Dukakis, Gore, and Kerry remember.

4 thoughts on “The persistence of the McGovern myth”