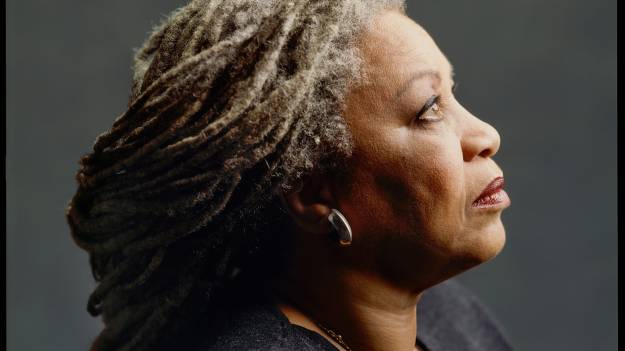 In “Goodbye to All That: Race, Surrogacy, and Farewell,” the late Toni Morrison wrote the closest approximation to a manifesto:

From the beginning, I claimed a territory by insisting on being identified as a black woman writer exclusively interested in facets of African-American culture….I wanted this vocabulary to stretch to the margins for the wealth that lay there and thus, not abandon, but reconfigure what occupied the center [italics mine]

. Later in this fine, taut essay, Morrison writes, “Race awareness apparently can never be sundered from politics. It is the result of a shotgun wedding originally enforced by whites, while African American artists (in the public and academic domains) are faulted and failed for dealing with the consequences of the marriage.” Her debut novel The Bluest Eye (1970) presented a writer of startling confidence, a master of her material. Young, self-aware Pecola, a survivor of parental rape, longs for blue eyes as if this residuum of whiteness gave her a chance in a country that had marked a place for her since birth. Rejected with a casual malice by relatives, Morrison’s protagonists have it especially hard. Remember Sula’s mother in the eponymous novel saying to a friend: “You love her, like I love Sula. I just don’t like her. That’s the difference.” Morrison depicted this phenomenon most harrowingly in Beloved (1987), in which Sethe, compensating for the vastation of a slave’s life, indirectly causes the murder of her daughter.

The rigorous scrutinizing of myth obsessed Morrison, and as did the way in which this scrutiny gets wobbly because the writer is half in love with the power of these myths. In her fiction, James Wood wrote in a review of Paradise (1997), Morrison narrates an African-American history which, “because it has so often not been written or officially recorded, has become a necessary superstition — a myth of made of oral tellings and retellings.” Song of Solomon represents the most fully realized attempt at having it both ways. The prevalence of Morrison on high school reading lists astounds me given the violence recorded in her books. Among the many transgressions committed by American school curriculum writers is the insistence on teaching history and literature as discrete subjects. To read about the Gilded Age in an AP American History course without touching Henry Adams’ novel Democracy is to miss important contemporaneous context; to read Beloved without teaching as a precursor Charles Dickens’ American Notes or, as a followup, The Souls of Black Folk vitiates the devastating impact of slavery fifty years after the Emancipation Proclamation. But then the sanctity of an American education comprises one more strand in the web of myths.

A few months ago Morrison collected her non-fiction in The Source of Self-Regard, of which “Goodbye to All That” represents a part. I spent a delightful March reading previously unknown to me analyses of Gertrude Stein’s “Melanctha” and reconsiderations of Melville and William Dunbar. These essays, speeches, and remarks on public occasions lack the precision of her novels, but the cumulative impact is impressive; this is a collection to live with, to return to when rereading one of the works of fiction she examines. What she thought of Donald Trump and the white supremacy for which he serves as dumb, dense Trojan horse I can only speculate. If Song of Solomon and Beloved “taught” readers anything, it’s revealing that the myths that white men tell themselves turn into semi-automatic Kalashnikov-style rifles and car attacks.