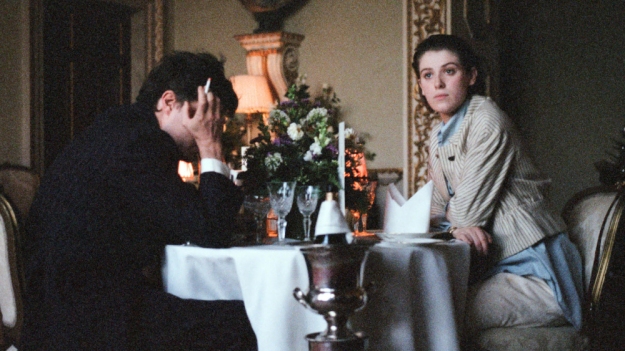 Joanna Hogg makes movies around the conversations that other filmmakers edit out. The Souvenir, her first since Exhibition (2013), has the pulse of autobiography and the confidence of art. When Julie (Honor Swinton Byrne) and Anthony (Tom Burke) share a bed about fifteen minutes after the picture starts, the audience may blink — are they lovers? If so, did we miss a scene when we bent down for popcorn? Interstitial scenes hold no interest for Hogg, whose previous films were composed of long sequence in which her actors gave minimalist performances in long shot; she’s the only filmmaker whose work shows the influence of Taiwanese masters like Tsai Ming-liang. Yet Hogg doesn’t hide the poshness of her characters’ backgrounds (2010’s Archipelago detailed the romantic tensions among vacationers in the Isles of Sicily), and The Souvenir, about Julie’s doomed affair with a heroin addict, may alienate watchers expecting frothier fare. But stick with it and the rewards are great. This is one of the year’s most rigorous, most heartbreaking films.

Hogg’s refusal to spell things out creates a conspiracy between the audience and Julie, a sheltered woman in her early twenties living in a Knightsbridge flat; it takes a while for her to figure things out too. For example, after she notices the bruises in Anthony’s left arm, he allows her to think that he hurt himself. A porcine man with a generous upper lip and an indifference to projecting empathy, Anthony is at least a decade older and works in the Foreign Office, although we take him at his word when he admits he’s underemployed. At champagne lunches in swank restaurants Anthony fascinates Julie with his opinions on Archer films and Symbolism. It’s clear he conceives himself as a Baudelairean dandy, detached from grubby things such as the burden of carrying cash, which might explain why Julie picks up the check on most occasions and the lack of embarrassment with which he borrows quid before going out  (Hogg assumes we know what he spends the money on).

I’ve read several intelligent remarks on social media that have taken Hogg to task for making Antony such a lout. Burke’s anti-charisma doesn’t help: if Tom works in the Foreign Office, one hopes that he himself never engages in diplomacy because the natives would throw him off a cliff. “I know you have a received idea of who I am,” he confesses after one of his periodic disappearances. Why does Julie stay with Anthony? Hogg provides a possible answer in the first third. With the self-assurance of a headmaster, Anthony critiques Julie’s application letter to film school. “People use ‘sincerity’ as if it’s an end in itself,” he says, not unkindly. The line rebukes the audience too — who cares whether a letter, a film, a cocktail is “personal”? As descriptor and criticism, “personal” is meaningless. Best to approach the Anthony-Julie relationship — which has its heated sexual moments, Hogg makes very explicit — through the prism of queer cinema. Why this man or that woman attracts us is a mystery of timing and availability, frustrating to those who love us.

In another example of Hogg’s flouting expectations, the people in Julie’s circle of intimates from whom she might expect resistance to Anthony actually press him close. Julie’s mum Rosalind (played by Swinton’s mother Tilda) and dad (a terrific James Spencer Ashworth) sense a kinship, a political one perhaps. Although The Souvenir takes place in Thatcher’s England, Julie’s parents are closer to Wodehouse aristocrats: dim and affectionate, not stupid and hovering; supportive but not crazy about Julie’s choice of a profession. Meanwhile her professors and colleagues at film school sense her withdrawal. How refreshing, by the way, to at last watch a film about the awakening of a female director. Her scripts and elaborate storyboards don’t prepare her for the infinite number of small decisions Julie must make on the set; Hogg shows how resorting to an unceasing courtesy — Julie thanks makeup people and cameramen for correcting her — is the first step in the erosion of a young artist’s illusions.

With concision and elegance Hogg documents the breakdown of a relationship whose doom matters less than what scrap Julie the budding artist can salvage for the sake of cobbling an identity; for Hogg, relationships, even loving ones, have a transactional foundation (her insistence may explain why she won’t find a wider audience) One of The Souvenir‘s leitmotifs is a two shot in Julie’s apartment: Julie in the kitchen on the right side of the screen, Anthony or Rosalind on the left. Natural lights enters from a window in the center. Each time Hogg returns to this framing marks a further decline of Anthony into the throes of addiction while Julie clings to a vision of domesticity destined to fade. Hogg also returns often to the couple at their swank restaurant table, shot in profile, Julie talking while Anthony, smoking his perpetual cigarette (the film grain seems suffused with nicotine), listens, not so much loving her as pondering her. As if to remind us of the enigmas of attraction, Hogg includes a scene late in the movie where Anthony lays his boyishly small bare feet on Julie’s shoes at that purgatorial restaurant; the moment has the decorum-smashing poignancy of the last thirty seconds of Robert Bresson’s Pickpocket, no less than Anthony’s otherwise too on-the-nose description of what’s going on in the Fragonard painting after which Hogg named her film. Let’s be clear, though: an on-the-nose Hogg scene is like hearing a chorus in a late Scott Walker piece.

To what degree The Souvenir will work on audiences depends on patience for Hogg’s anti-romantic ethos; her approach isn’t desiccated, it’s skeptical, incarnated in Byrne’s un-actress-y performance. Julia’s mildness and goodness are never a grind. The film climaxes with Rosalind mustering her rusty maternal reflexes to console her weary daughter. Coiffed and costumed like a dowager just home from a bridge party, Tilda Swinton keeps Rosalind’s emotions under control; she has to be strong for Julie’s sake. Few directors would include the scene where Julie and Rosalind, in the bed Julie once shared with Anthony, react to bad news: it’s Rosalind who quietly weeps. “Don’t be worthy — be arrogant” is just one of the many pieces of unsolicited advice Julie gets. Whether it sustains her through the end of her student film we’ll know when The Souvenir‘s sequel gets a release. Never arrogant, worthy in a manner that eschews the merely high-minded, The Souvenir presents the best kind of aesthetic challenge.

9 thoughts on “In ‘The Souvenir,’ Joanna Hogg approaches romance with skepticism”