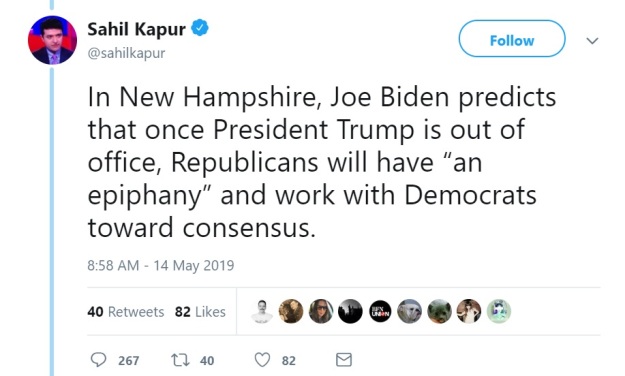 This core sentiment that Trump is an unusual, and unusually bad, president has fueled everything from a primetime ratings boom for MSNBC to the unprecedented popular mobilization of the original Women’s March. Antipathy to Trump powered Democratic candidates to sweeping victories in the 2018 midterms and is very clearly one of the dominant political sentiments of our time. Yet Biden’s thesis statement about Trump-era politics drew surprisingly widespread criticism from left-of-center opinion leaders.

Mehdi Hasan at the Intercept wrote that “the No. 1 reason why Biden would be an utter disaster both as the Democratic nominee and as president is his belief that Donald Trump is the sole cause of the current political and constitutional crisis in the United States.” But the criticism came from circles broader than the hard left. Frances Wilkinson at Bloomberg deemed Biden to be “running against a myth about Trump,” while Michael Tomasky at the Daily Beast urged Biden’s friends to “grab him by the lapels and inform him that it’s not 1973 anymore and his ‘friends’ in the Republican Party, nice fellas though they may be on a personal level, have changed.”

Peter Beinart at the Atlantic accused him of offering “a deeply unconvincing historical narrative in which Trump lands upon the American political scene from outer space.”

If Hasan and Beinart agree, a tectonic shift has occurred in Democratic intelligentsia. It’s possible Biden is faking us out for the sake of the nomination; but on a morning when Elizabeth Warren explained, with her usual surfeit of detail, why she would not appear on a FOX News town hall, Biden’s sleeping with the enemy looks especially repulsive.