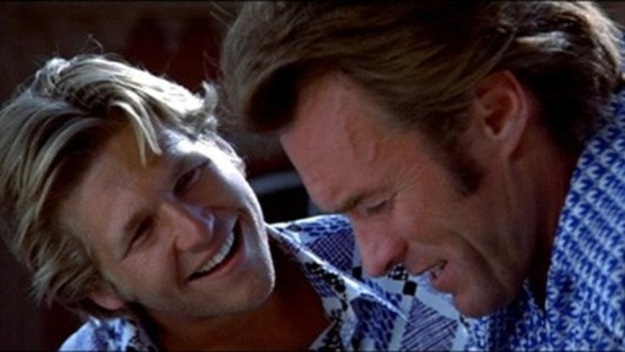 No country in the world can produce a film actor like Jeff Bridges; it takes a confidence borne of privilege and luck and how talent binds the three together. To imagine him onstage is to imagine him in shackles and sackcloth. A gregarious bear of a man with fabulous hair, Bridges wields a shit-eating grin like Douglas Fairbanks, Jr. did a sword. Although he enjoyed his first fame as a welcome supporting actor, he became an unfussy example of American good will and tolerance at its best, i.e. what we watch in films, not in real life. Think Against All Odds, Tucker: The Man and His Dream, and his turn in Michael Cimino’s Thunderbolt and Lightfoot, where his amiability washes against Clint Eastwood’s granitic dourness so relentlessly that I’m sure there’s gay slash fiction about them someplace (Robin Wood had no problem imagining it). My friend Bill said at the time of Brokeback Mountain that he would’ve cast Bridges and Dennis Quaid as Jack Twist and Ennis del Mar.

But Bridges would have understood the self-loathing in Ennnis too — he demonstrated it in Cutter’s Way, The Fabulous Baker Boys, and The Fisher King . Or Fearless, the forgotten Peter Weir film I stuck (today!) atop because he grasped the arrogance and melancholy of a plane crash survivor; his character is in the middle of turning into Clint Eastwood before catching himself.

When his casting in Iron Man was announced eleven years ago, I groaned. Bridges had accepted the forgotten Blown Away to get a hit, any hit. Watching the interplay between him and Robert Downey, Jr. brought back memories of Jeff ‘n’ Clint in a superior film made almost thirty-five years earlier. In a sense the chugging cult success of The Big Lebowski prepped audiences for Bridges in a box office phenomenon. Suddenly the Academy of Motion Picture Arts & Sciences realized it had not awarded him an Oscar despite four nominations; it gave him a Best Actor prize for one of his most conventional performances as a Highwayman amalgam in Crazy Heart. Fortunately he got another shot at a similar character in the Coens’ loosey-goosey remake of True Grit and shone brighter.

Bridges is sixty-nine. He still has time for a big gregarious old man performance.