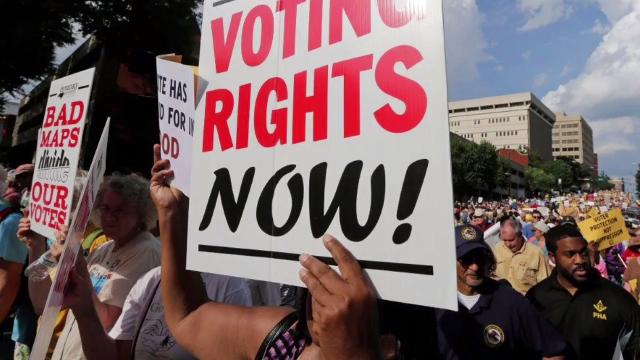 When Floridians by a sixty-five percent margin voted on an amendment in November automatically restoring voting rights to hundreds of thousands of former felons, I hope they foresaw the catastrophe. No way would the Florida GOP allow almost a million former felons, most of whom are people of color, back on the voting rolls without a fight. The adverb in my first sentence matters; the amendment was, unusually, crystalline in word and intent, mandating an automatic restoration.

To Governor-elect Ron DeSantis and his colleagues, however, “automatic” is a point of view. At an elections conference a couple weeks ago, the state said it has, according to the Tampa Bay Times, “stopped transmitting documents counties use to remove convicted felons from the rolls.” Legislators need more time. Indeed, DeSantis has already said he wants the legislature to write “implementing rules,” which means a two-month delay until the session opens in March. Election supervisors are fuming:

All this talk about the legislature is baffling to elections supervisors and civil rights groups, who say the amendment was designed to be self-executing. The state Supreme Court unanimously approved the amendment’s language as clear and specific, saying voters could understand that the point was to “automatically” restore the affected population’s voting rights.

A self-described “strong Republican” who tried to enact felon rights restoration during his 12 years in the state Senate, Bennett called himself an “advocate” for Amendment 4. As Bennett noted, the Senate Ethics & Elections Committee won’t have its first meeting until March, and any proposed measures will then have to pass the House, the Senate, and be approved by DeSantis.

“That process will take more time whereas if the secretary of state’s office handled it and came up with the definitions and clarifications, they could do it much faster,” he said.

Without uniformity and guidance, the possibility exists that men and women who show up to vote will, ye gods, fall into the GOP trap of committing voter fraud:

For the percentage of my readers who believe in the new federalism, the results look inevitable: counties with Democratic mayors will move quickly to answer the will of voters, while counties with Republican ones will stop short of outright defiance. Advocates of the new Confederacy will always find support.