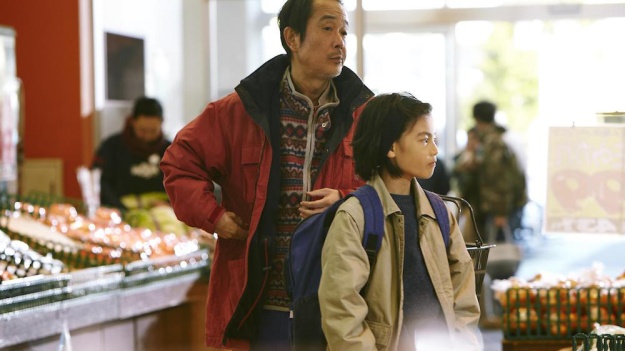 Late into Shoplifters the mother Nobuyo (Sakura Ando), interrogated by the police, faces the camera, rubbing the right side of her face in an effort to contain her emotions. The camera will not relent. What occurs is a moment of expiation as intense as anything in an Ingmar Bergman film, disrupting the subtle accretion of details in which Shoplifters has trafficked. It doesn’t throw the audience out of the film so much as force them to think about what has been at stake in the last hour and forty-five minutes.

Since his startling debut Maborosi (1995), Hirokazu Kore-eda has made a series of films about the tensions within families that are necessary for the self-definition of the younger members. Yet an amazing thing has happened. The formalism of his earliest films has dissolved; in its place is a looseness commensurate with the warmth show onscreen but always shaped by his editor’s eye. His newfound prolificacy plays a part too: this Palme d’Or winner is Kore-eda’s fourth full-length film since 2015’s marvelous Our Little Sister. Study those titles — a pace that would’ve impressed Rainer Werner Fassbinder. He could have called this one Our Little Sister or Like Father, Like Son.

But if Shoplifters has a precedent in Kore-eda’s work, it’s 2004’s Nobody Knows, about four kids suddenly forced to live on their own. How relatives realize they like each other after years of merely loving each other is one of his themes. For Osamu (Lily Franky), the family that steals together stays together. In a title sequence set in a grocery store edited with casual mastery by Kore-eda himself, Osamu and a boy, Shota (Jyo Kairi), stick what look like containers of ramen into their pockets after a series of telegraphed gestures. On their way home a girl observes them. They share a croquette and take her with them. Besides Nobuyo, Aki (Matsuoka Mayu) and the family matriarch (Kiki Kilin) need feeding. Now the girl, Juri, joins them. Motivated by a sense of obligation, not need — it’s obvious from their first exchange that Osamu delights in the girl and doesn’t see feeding her as an new burden — they take the mostly mute Juri to own home after dinner and almost succeed until Nobuyo and Osamu watch a couple fight. And with that Juri becomes part of the family.

Before this scene, though, Kore-eda has already signaled her new place by shooting Juri observing Shota and Osamu comparing their booty. No close-ups or medium shots, just a sense of movement absorbed a young mind almost out of the frame but already implicated in the events. Kore-eda works in these subtle ways. The movie unwinds like a ball of string. So ingrained is the work ethic in Japan that the family takes its intermittent jobs as seriously as anyone else. Nobuyo works a shift at a laundry, taking things customers leave in their pockets (in an almost throwaway moment the concept of work-share is introduced, whereby employees share the labor and split their schedules). Grandma does odd jobs. Aki, a young college-age woman, is the most poignant case: a sex show employee who takes her role playing too seriously. I haven’t forgotten a scene where she notices a client’s cutter marks is one of the more plangent expressions of need in recent film.

But Juri does have parents, and Shoplifters‘ triumph is to emphasize the protean ties of family; we are who we say we are, despite bloodlines.  After all, Osamu has told Juri, “If they say they love you but hit you, that’s a lie.” The last half hour calls to mind The Rules of the Game in its inevitability, precisely calibrated climaxes, and absence of melodramatic cheapness. Kore-eda’s editing accentuates the urgency; in this regard Shoplifters makes Alfonso Cuarón’s Roma, mentioned only because its maker took credit for every essential, look particularly pompous, like a child in a formal ball gown. Yet as the noose tightens Shoplifters becomes ever more spontaneous, a rarity. A beautifully improvised sex scene between Nobuyo and Osamu during dinner, al fresco (“You’ve got leeks on your back!”), for example.

Kore-eda’s last film The Third Murder marked a rarity: an experiment, not altogether successful, in a genre picture. Shoplifters returns him to what he knows, informed by what he learned about pacing from the attempt at a whodunit. Audiences who admired 2009’s Still Walking will be unprepared by the small miracle after miracle he gets away with. It’s a great film.

2 thoughts on “‘Shoplifters’ understands the delicate balances of families”