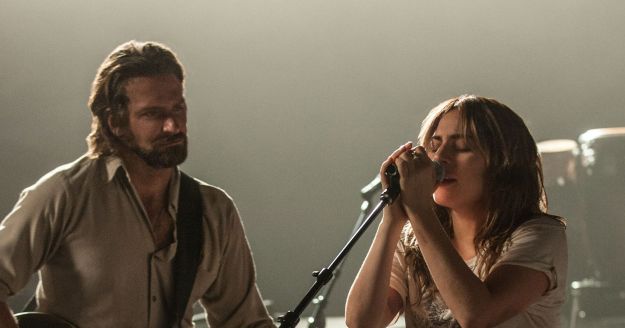 For anyone who has watched the three versions of A Star is Born (four if you count 1932’s What Price Hollywood?), the moment when the drunken has-been accidentally slaps his wife as she accepts an award onstage creates the greatest, sickest anticipation. I’ve watched George Cukor’s 1954 Grand Guignol version at least fives times and my stomach knots every time as Esther has to keep her star’s dignity while her husband humiliates himself and her for putting up with his sodden ass (James Mason manipulated his natural courtliness to shrewd effect so that Norman Maine is never merely gross). Well, it’s 2018, and, realizing how gauchely this might play, director Bradley Cooper confines himself to collapsing in front a televised audience of billions when pop singer wife Ally accepts her Best New Artist Grammy.

Here’s the good news about Cooper’s adaptation: Lady Gaga, who plays Ally, can deliver lines, wring them for yuks and pathos, and hold the camera’s attention. Whether she can “act” is irrelevant. “Acting” onscreen is often the projection of a compelling and often mysterious assemblage of qualities. That’s that. The bad news is that, again, it’s 2018, and the script, co-written by Cooper, Eric Roth, and Will Fetters, depends on the same masochistic tropes that were stupid at the height of the New Deal. Motivated by loyalty and the way Jackson Maine’s bangs tumble idly over his crinkled blue eyes, Ally continuously pauses her burgeoning career to take care of her jackanapes of a husband. She has no agency. Even when her music, which he loathes when he’s not co-writing or arranging, storms the pop charts she gets no credit other than for working hard, the ultimate biz putdown. As a recently dead sage once sang: it’s not really words; it’s just the power to charm.

Nevertheless, the picture’s first forty-five minutes, as you may have read, earn their keep. In a darkened limousine Jackson pops pills and jumps onstage to play an intense set (the music sounds like a mix of Drive-By Truckers and Eric Church). Out of booze post-gig, he stops at a late night drag bar. Ramon (Hamilton‘s Anthony Ramos), recognizing the country star, asks him to stay for the set. A couple of brief scenes intercut with the concert footage had shown Ally struggling as a waitress; onstage in front of a welcoming audience she uses “La Vie en Rose” as a showstopper. It’s a full performance, familiar to Gaga fans, and I can understand why Cooper cast her. At a cop bar she punches out an officious patron, requiring a trip to a twenty-four-hour convenience store for frozen peas: Jack doesn’t want her piano hand bruised. In the parking lot she wows him with an embryonic version of “Shallow.” Hooking up in his suite is a failure: Jack passes out. This inspires a poignant moment of Ally in long shot sitting forlorn at the foot of the bed as Jack sleeps. It won’t be the last time.

But A Star is Born unravels after the first third’s minor charms. We’ve got a loooong way to go. The intimacy created by Cooper and cameraman Matthew Libatique dissipates in favor of short scenes whose occasional pungency and pathos don’t compensate for their weightlessness. This is where the mothballed material that defeated the 1976 version starring Barbra Streisand and Kris Kristofferson and occasionally made Cukor’s wobble works against Cooper too. Solicitous about tending to Ally’s muse, generous with his time and budget, Jack sinks further into addiction as Ally’s star ascends. His half-brother and minder Bobby, old enough to be his dad, pops up to growl beef-jerky-gnarled wisdom; Sam Elliott steals scenes that need no stealing with that baritone, a pitch as unmistakable as Gielgud or Burton’s and in many roles as much a hindrance to appreciating the range of his talent (“Why’d you steal my fuckin’ voice?” Bobby asks in a fraught moment). Ally has her own family drama too: an unrecognizable and hammy Andrew Dice Clay plays her town car driver of a dad Lorenzo, saddled with his own Sinatra dreams. His appearances induced more covert watch glancing on my part; they’re too bald an attempt to “deepen” Ally as a character. Yet Ally and Jack don’t forget to remind underlings that they’re stars, for another of this movie’s anachronisms is the reduction of the gay Ramon and Jack pal Noodles, played by Dave Chappelle, as devoted minders.

Jack, whose recording career stops for reasons Cooper doesn’t show, succumbs to disgust, like so many dudes before him and on your Facebook page who rail against contemporary pop, at the choreographed direction in which Ally’s Simon Cowell-esque manager insists she take (Rafi Gavron as Rez uses his English accent like villains of an earlier era twirled mustaches). By now this is a wheeze. An A Star is Born true to the performer whom Cooper cast would’ve shown Jack besotted with the artifice he doesn’t see in his world of bearded melancholy. Maybe actors like Cooper see so much bullshit at meetings around the Chateau Marmont pool that they forget their instincts: that what they loved about Garland, Dean, Bowie, and Jack Nicholson was how they presented themselves as otherworldly and not quite human yet were accessible anyway. Cooper wants the human and not the alien even though the alien got his attention.

Cooper on the other hand isn’t a heart-throb despite his looks. He isn’t a person. From his first screen appearances he has projected an affable blankness; in a thirties movie he was David Manners, in the forties Van Johnson, in the eighties Anthony Edwards (the nineties stopped producing them, more or less, unless I’m cruel and count early Brad Pitt). He’s not terrible as Jack, and his decision to lower his timbre so that it rumbles like Eddie Vedder imitating Heath Ledger complements Jack’s affected rumpled sexiness; but he and Gaga are implausible as a couple with the hots for each other. She’s like a lesbian whose best straight friend needs an intervention. The movie’s most frightening scene recreates the bathtub canoodling of Streisand and Kristofferson, despite dangling a delicious possibility: what if Jack had worn the makeup and sang “La Vie En Rose”?

Perhaps commercial considerations required that the intelligent people involved with this production of A Star is Born quash the obvious conclusion: Ally, despite her professions of love, is in this for mercenary reasons (the execrable 1976 version, thanks to the casting of Streisand, already projecting a don’t-bullshit-me persona, comes closest to accepting it). And what would be so wrong with that? We accept showbiz marriages all the time. My screening audience, no other critics in sight, greeted a howler like “I am what I am, and I need to find Jack” with deserved snorts and hisses. Most unhelpful is the realization that Ally’s songs, whether subjected to Jack’s ministrations or not, lack any distinction, and when I checked the credits the appearance of Diane Warren (along with, to be fair, Jason Isbell and Lori McKenna) shouldn’t have surprised me: she’s the biz idea of sincere award-winning songwriting, suitable for Cher and Aerosmith alike, which drenches Ally’s decision to use this material in irony.

With its adherence to gender constrictions, A Star is Born and the public might still connect. The straightening/straitening of Gaga follows similar career moves by Madonna and Bowie: Ally is supposed to be The Real Gaga, the Stefani Germanotta who despite an Upper West Side upbringing reconstructed herself as the brashest iteration of queer-influenced exaggerated femininity and why not? Only a neophyte director or one of limited imagination would stage the performance of an Edith Piaf cover in a drag club as the first step toward accepting herself as vessel for Diane Warren material. Given Gaga’s own commercial fortunes of late, her final scene — Ally in a boring formal gown tearfully belting a song that can’t touch “Evergreen” — represents her own calculations about what she thinks her audience wants.