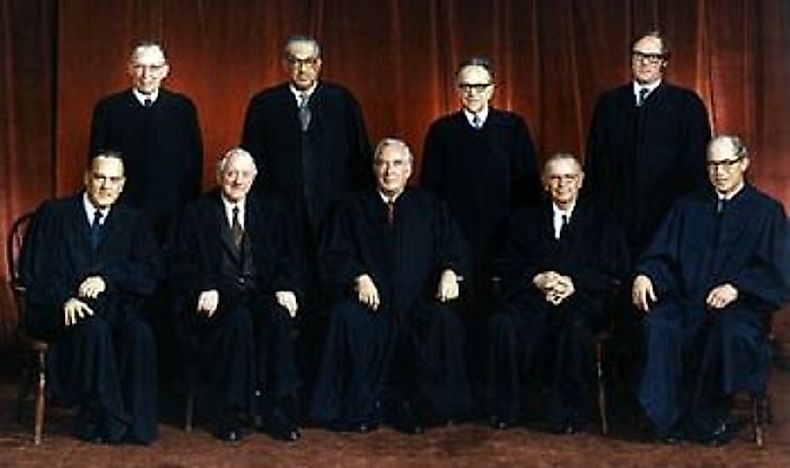 The most common arguments I endure from opponents of Roe v. Wade concern its reputation as a feebly written decision (“Even Ruth Bader Ginsberg said so!”) and as an unwarranted federal protection of a matter best left to the states. Scott Lemieux swats aside these arguments. Few felicities of judicial language have been the subject of as much mockery as FDR appointee William O. Douglas’ phrase in his concurrence in 1967’s landmark Griswold v. Connecticut, in which the Court ruled that bans on contraception violated the right to marital privacy: “The foregoing cases suggest that specific guarantees in the Bill of Rights have penumbras, formed by emanations from those guarantees that help give them life and substance.”

Erratic and downright slipshod, the latter in his last decade, Douglas was one of the last justices to write his own opinions, which like Oliver Wendell Holmes bent toward the brief and aphoristic; he wanted his opinions to be understood by the average person. No one quibbled with his intelligence or ability. Nor his ambition (Roosevelt goosed him into thinking he’d be president one day).

Opponents of Roe writing for general audiences routinely invoke the “penumbras” phrase, from Justice William O. Douglas’s opinion striking down a ban on the use or distribution of contraception in Griswold v. Connecticut, as if doing so self-evidently renders the opinion absurd. Douglas had used that phrase to defend the idea that the Constitution includes an implicit right to privacy, in at least some matters of marriage and family, and the Roe majority cited it to extend that idea to the realm of abortion.

But Justice Douglas’s observation that “specific guarantees in the Bill of Rights have penumbras, formed by emanations from those guarantees that help give them life and substance” describes a perfectly banal concept: The enumeration of rights, individually or collectively, implies the existence of other rights. As Douglas himself pointed out, in Griswold, the Supreme Court has enforced a “right of association” although that phrase is not found in the Constitution, because guarantees of the right to free speech and to petition the government would mean little without the right to form political associations.

As for the federalism question, the stakes are grimmer:

As previously discussed, Congress has passed, and the Supreme Court has upheld, a nationwide ban of what anti-abortion groups have labeled “partial-birth abortions.” To find the last time the House of Representatives passed an abortion regulation, you would have to go all the way back to … this January, when it passed a bill that would require doctors to provide medical care for a fetus born alive during an abortion procedure.

And last year, the House passed a bill that would ban abortions after 20 weeks in every state in the union. So far, these bills have died in the Senate. But since the Republican Party is becoming more and more hostile to abortion rights, abortion would remain a national issue. Should the filibuster be eliminated or substantially watered down, a Republican government with slightly larger Senate majorities than it has now would be able to pass national abortion regulations.

The other myths that Lemieux deflates include the purported ease with which American can get abortions as opposed to the French, Roe‘s rescinding of any state regulation, and the strength of public opinion. It’s the kind of article I’d share with friends or print to stick on the refrigerator door.