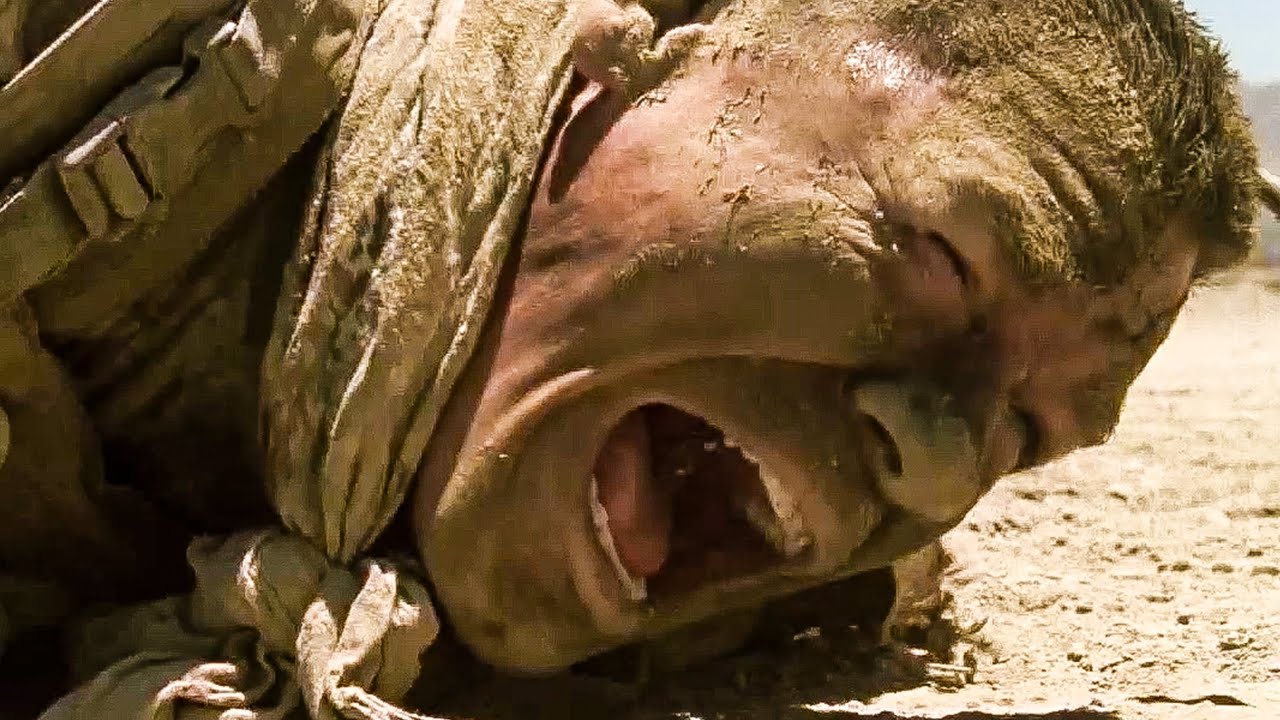 Using Hitchcock tactics to define the conflict between American soldiers and Iraqi resistance would have offended me more deeply if The Wall had ambition. Besides, after In the Valley of Elah, Redacted, and Lions For Lambs I’ve had my fill of swollen Hollywood prestige film rhetoric about Why We Fight. For eighty-one minutes, to the exclusion of every peripheral, Doug Liman’s film focuses on  American sniper Isaac (Aaron Taylor-Johnson), pinned behind the remains of a brick wall in the middle of the desert, and the wily counterpart, unseen but voiced by Laith Nakli, hiding in a rubbish heap. Each tries to outfox the other.

The other corner of this triangle is Staff Sergeant Shane Matthews, played by wrestler John Cena as a ham hock waiting to be sliced. On a counter sniper mission after contractors building a pipeline are murdered, he and spotter Isaac suspect something is amiss when the corpses of the dead sport kill shots in their heads. They wait more than twenty hours before descending the ridge where they’ve been camouflaged. These discoveries don’t stop Matthews and Isaac from engaging in the homoerotic banter and tampon jokes of six thousand other combat movies; Cena even wiggles his decent ass at the camera. Nevertheless, by isolating Matthews in the endless sand-blasted terrain, Liman builds suspense the old-fashioned way: something’s going to happen soon. Then Matthews gets shot. Trying to save him, Isaac gets his kneecap blown off. He crawls to the titular wall, behind which he learns after applying a hasty tourniquet that the sniper fire also damaged his radio. He and the prostrate Matthews are alone without water and food (do melted Skittles count?) until a rescue team deigns to save them. Meanwhile over a local frequency the nameless sniper taunts Isaac, encourages him to tell him more about his past. Isaac obliges, the better to get a fix on his location; even the bang of a metal door will do.

For the remainder of its running time, The Wall has to reckon with Dwain Worrell’s boring script. Do viewers need another movie in which the American is an ill-read Southern hick and his antagonist a mellifluous citer of Frost and Poe? An English teacher whose school was bombed by the American occupying force, the Iraqi sniper has no use for pieties about liberation. By turning fifteen years of arguments and counterarguments into survivalist hooey, perhaps The Wall isn’t so cynical a reading of the marketplace after all. We’ve had enough of pieties ourselves. Kill or be killed. It’s there in the ending, both harsher, more conventional than expected, not to mention of current realities in a Middle East to which we have turned repeatedly for blood sport.