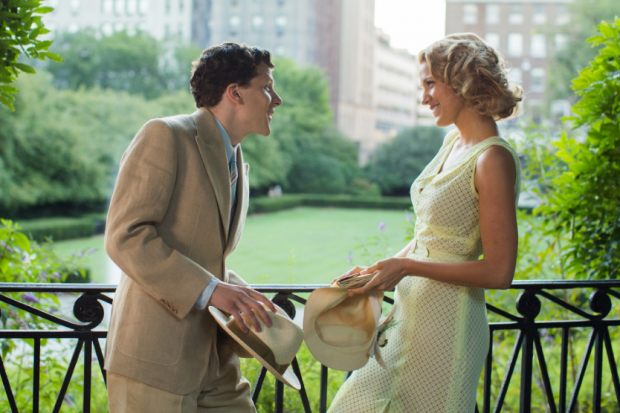 As he demonstrated in 2012’s To Rome with Love, Jesse Eisenberg is the best cast of Woody Allen alter egos. Garrulous and conceding nothing to audience sympathy, he has Allen’s verbal facility and none of the writer-director’s weaknesses as an actor. Cafe Society reunites Eisenberg with Kristen Stewart, the object of affection from 2009’s Adventureland for an innocuous divertissement set in 1930s Hollywood about a jeweler’s son falling in love with his uncle’s girlfriend. In 2016 “innocuous” is the best thing I can say about an Allen comedy, and if it rises to this level of skill at all it’s in large part due to Eisenberg and Stewart.

Steve Carell plays the uncle, superagent Phil, a kind of proto-Michael Ovitz who can’t construct a sentence without mentioning that he just got off the phone with Gary Cooper or had lunch with Joan Crawford. Reluctant to be pressed into service for the sake of Brooklyn Jewish relatives whom he has spent his life avoiding, Phil gives the naive Bobby (Eisenberg) token support: invitations to brunch, nonsense job as his courier, that sort of thing. To acclimatize him to the heady air, Phil hooks him up with Vonnie (Stewart) as a tour guide. During casual lunches at Mexican restaurants Bobby falls for Vonnie; she gently rebuffs him, reminding him she’s got a boyfriend, “a journalist.” Phil, who as usual can’t seem to leave his wife, discovers his own feelings with Vonnie run stronger than he anticipated: he wants to marry her. Shattered, Bobby returns to New York to work for his older brother Ben (Corey Stoll), a gangster who cheerfully buries rivals under several pounds of cement when they cross him. After a while the nightclub he helps run becomes New York’s it place, where the elite meet and the martinis are dry.

As busy as a lunch rush, Cafe Society includes cutaways to and stop-overs at the bickering Jewish family, the most memorable of whom is Rose, played by Jeannie Berlin as a cross between Elaine May in Allen’s Small Town Crooks and Alvy Singer’s mom in Annie Hall. Self-cannibalizing is Woody’s metier; add Crimes and Misdemeanors, Hannah and her Sisters, and Manhattan to the list. And when he suspects the purple-haired biddies in the audience have fallen asleep he sticks a piece of curdled wit in a character’s mouth like, “Socrates said that the unexamined life is not worth living, but the examined one is no bargain.” All that’s needed is Bobby’s visit to a old windbag philosopher or rabbi, preferably blind (there’s a young philosopher in the movie, and I’m not sure Allen wants us to giggle at him). Vittorio Stotaro lights the Hollywood scenes like photos from Vanity Fair or Country Life, with an emphasis on aquas and whites, and he succeeds; Cafe Society looks crisp, the images have a glow. But if a writer’s going to title a film Cafe Society then he better write dialogue worthy of it, and the cafe scenes don’t come until more than halfway through the picture anyway. Although he keeps the thing moving at a decent clip, Allen’s lost much of his rhythm. Those family exchanges are like sitcom scenes awaiting laugh tracks. Carell fares worse. Decent at playing self-deluded fools, he merely looks foolish; it might have something to do with giving CPR to lines like “Dare I kiss you?”

If Cafe Society is a fly speck above recent Woody fare like Magic in the Moonlight, Irrational Man, and the interminable Blue Jasmine, credit Eisenberg and Stewart. With her self-contained melancholy, hooded expression, and skill with throwing away lines, Stewart can deflect any undue emoting hurled at her. She’s too modern in manner and speech for Cafe Society, which is appropriate: Woody Allen is too archaic in manner and speech.