An amiable craftsman of the here’s-another-table-I-built school for most of the nineties until crossing over pop with the most poignant of 9-11 songs — a feat that alluded Wilco, sure, but also Paul McCartney — Alan Jackson’s new head of steam dissipated after 2006’s exemplary Like Red on a Rose. It’s a pleasure to have him back writing good songs again. Angels and Alcohol leads with its best cut, an admonition that also serves as a reminder, to himself most likely. History suggests he’ll return to unflagging carpentry work again. “Suddenly, Jackson’s unflagging ordinariness became his greatest strength,” Keith Harris wrote in a fine recent appraisal about “Where Were You (When the World Stopped Turning),” but Angels and Alcohol suggests he can still flex.

In March this album sounded undeniable, a minor classic. Repeated play exposed a voice that sometimes can’t keep up with the tunes or guitar, and overexposure on year end lists cooled my ardor. But when I play “Depreston” and “Nobody Really Cares If You Don’t” I hear the 2010’s answer to those “well-crafted” John Hiatt and Marshall Crenshaw records I was supposed to eat with my parsnips two decades ago.

Back in September: After a couple of mix tapes (including 2012’s remarkable Reservation) and a commercial release that delighted nobody, Angel Haze returns to first principles, crafting these beats with the help of Tk Kayembe and no guest stars in a forty-minute display of virtuosity as excoriating and complete as anything by solo Lennon and Eminem, the latter of whom got a bigger favor than he deserved with a “Cleaning Out My Closet” cover re-imagined as a admission of incestual rape without a garish note. The self-professed agender rapper’s a fatalist but not a defeatist — that’s why Back to the Woods exists. 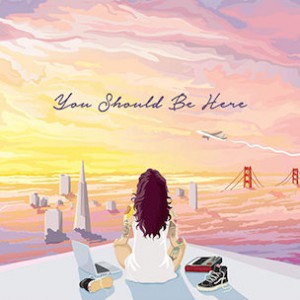 Every December an album elbows its way into my meticulously assembled list. The twenty-year-old Kehlani Parrish’s debut is thicker, less aqueous than Tinashe or Jhene Aiko’s work. You Should Be Here chronicles the life of an adult woman who gets over lovers better than she has her mother, the subject of a gripping bit of confessional angst called “The Letter.”