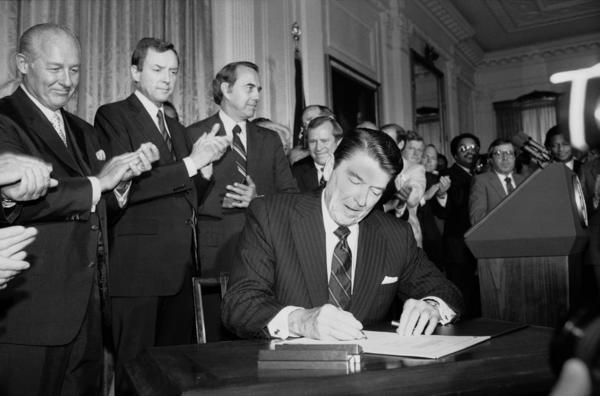 “Do you think they are going to appoint someone with extensive civil rights experience to head that division?” Erwin Griswold said about protegé William Bradford Reynolds, chosen by Ronald Reagan to head the Civil Rights Division in 1981 and not one to waste time adjudicating old wrongs or on clear English:

Before, you didn’t have the programs that were designed to focus on color. In the 1950s, for example, which all of us recognized was as wrong as you can get, you didn’t have a quota program or an affirmative action program or a voting rights program. During that ear, the cry for color blindedness was to try to wake up people to the fact that everything was color-coded…When you get to the 1980s, the problem was that the solution to discrimination became to color-code.

That neologism had a simpler but no less grotesque synonym: “reverse discrimination,” the rebel yell of every opponent of voting and civil rights of the last thirty-five years.

In Ari Berman’s terrific Give Us the Ballot: The Modern Struggle for Voting Rights in America, The Nation correspondent spends little time on what is familiar terrain – Lyndon Johnson’s full endorsement of the Voting Rights Act in 1965 – to explore less hallowed ground. Thanks to the invaluable John Lewis, bludgeoned on the Edmund Pettus Bridge, and allies, black and white, Democratic and Republican, the Voting Rights Act survived initial dilution efforts by the Nixon administration to actually get more encompassing with each congressional reauthorization. Then a cabal of Justice Department appointees, thriving in the new dawn of Reaganism, sought to undo these advances. Republicans took the Senate for the first time since 1952. Ted Kennedy’s replacement as chair of the Judiciary Committee? Strom Thurmond. Key to these efforts was an ambitious lawyer named John Roberts, who drafted talking points, speeches and op-eds for Reynolds and attorney general William French Smith. “John seemed like he always had it in for the Voting Rights Act,” career Justice Department lawyer Gerry Herbert tells Berman. “Voter fraud” replaces reverse discrimination as the new crusade. Lightning strikes are more common yet the zealots insisted on the danger to the Republic. On occasion the truth oozed from the cracks. “I don’t want everybody to vote. Elections are not won by a majority of people,” said New Right crusader Paul Weyrich in 1980. “As a matter of fact, our leverage in the elections quite candidly goes up as the voting populace goes down.” Rewrite the old saw about money: when someone tells you these state laws aren’t supposed to restrict the right to vote, they’re about restricting the right to vote.

At least Reagan, encouraged by none other than Bob Dole (already aware that he lived in the Cretaceous Era for establishment Republicans) signed the reauthorization; even Reynolds went along, converted by a trip to rural Mississippi with Jesse Jackson to see, to quote Berman, “how white plantation bosses and factory owners forced employee to work overtime on Election Day, moved polling places from black to white neighborhoods, and white neighborhoods [were] annexed to dilute black representation.” A foxier crew in the administrations of both Bushes would do subtle things with the last point. Collaborating with black legislators in a heartbreaking example of (un)intended consequences, these voting rights denialists formed the Fairness for the ’90s coalition, one of whose goals was to ensure healthy percentages of black voting by creating majority black districts. The results: intensely white voting districts in the South that elect conservative legislators. During the second Bush administration, Berman writes, people were referring to Brad Reynolds as the good old days. Voter fraud became the bugaboo. Charlatans like Hans von Spakovsky saw their dreams realized when in the 2013 Shelby case old ally John Roberts and four other justices struck down, in an ingenious strategy, Section Four of the VRA. The coverage formula, whereby Congress had singled out Alaska, New Mexico, districts in New York, and much of the Deep South as places with egregious histories of voting rights suppression, was eviscerated. As Berman acidly notes:

A law that eight justices had praised as a “valid effectuation”of the Fifteenth Amendment in 1966 had been transformed into a “racial entitlement” that only the Supreme Court was brave enough to end.

Typical of John Lewis’ generosity was lobbying as congressman for VRA expansion in 1975 to cover Mexican Americans, the latest victims of disenfranchisement. “It would be a mockery of the whole Voting Rights Act effort during the past 10 years if we leave the Voting Rights Act as it is and not cover the other minorities in this country,” he said. It passed. After registered voters increased by 5 percent in 2008, several GOP governors said enough of that. The Pennsylvania house majority leader was as outspoken in 2012 as Weyrich: a rescinded voter ID law would “allow Governor Romney to win the state of Pennsylvania.” In my own state Rick Scott overturned predecessor Charlie Crist’s decision to restore voting privileges to convicted felons, leading to the disenfranchisement of almost 100,000 Floridians. And brace yourselves: one person one vote got a skeptical hearing before Roberts and the Furious Five yesterday. John Lewis is denied a serene old age.