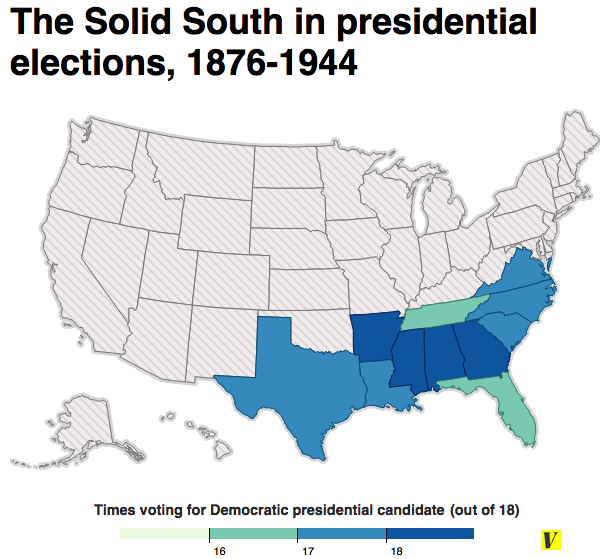 As I posted today and earlier this week, Princeton students protesting the deification of Woodrow Wilson object to his discriminatory policies as president. Resegregating the federal government ended the sinecure on which middle class blacks had depended since the Gilded Age. Keep in mind: the Republican Party had been the dominant political force since 1860, losing only two presidential elections (quick, name to whom they lost, and he wasn’t friendly towards black citizens either), still home to liberals who took seriously the efforts not just of Abraham Lincoln but Charles Sumner, Thaddeus Stevens, James Blaine, Roscoe Conkling, and other satraps unofficially guilty of varying degrees of corruption but apostles of patronage and for whom honoring a debt to the freedmen meant earning their vote (I’ll say it again: political imbecility notwithstanding, no president did more between Lincoln and FDR for the freedmen than Ulysses Grant). The Democratic Party by contrast was home to the likes of James Vardaman and “Pitchfork” Ben Tillman . Realignment was a generation away.

Gordon J. Davis‘ NYT column is the first account I’ve read by a descendant of one of those blacks demoted by Wilson, a civil servant at the Government Printing Office who made decent money and idolized Teddy Roosevelt:

But only months after Woodrow Wilson was sworn in as president in 1913, my grandfather was demoted. He was shuttled from department to department in various menial jobs, and eventually became a messenger in the War Department, where he made only $720 a year.

By April 1914, the family farm was auctioned off. John Davis, a self-made black man of achievement and stature in his community at the turn of the 20th century, was, by the end of Wilson’s first term, a broken man. He died in 1928….

….Consider a letter he wrote on May 16, 1913, barely a month after his demotion. “The reputation which I have been able to acquire and maintain at considerable sacrifice,” he wrote, “is to me (foolish as it may appear to those in higher stations of life) a source of personal pride, a possession of which I am very jealous and which is possessed at a value in my estimation ranking above the loss of salary — though the last, to a man having a family of small children to rear, is serious enough.”

When pundits wheeze about starting Conversations About Race, here’s the real thing. To watch a documentary on this forgotten chapter of American history would be a great service. And columns like Davis’ wouldn’t have been written without Princeton. I don’t want Wilson’s name effaced from Princeton’s walls — I want the veneration effaced.

2 thoughts on “The legacy of Wilsonism”