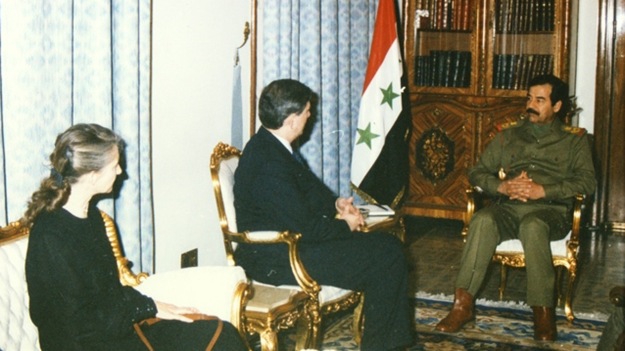 The late Christopher Hitchens wrote an account of the absurd, hilarious shadowplay in which the United States and Iraq entertained one another in the summer of 1990. This led eventually to Saddam Hussein’s decision to invade Kuwait. Months after rebuking another former client named Manuel Noriega, George H.W. Bush said, “This will not stand,” read a Churchill biography, wooed a politically unstable Mikhail Gorbachev (more popular overseas in 1990 than in his crumbling country), and led an impressive global coalition with an Security Council imprimatur. The more we learn about Bush — we will learn more years after the former CIA directors’ death — the more the obvious looks obvious. Deposing heads of state whose testimony in court might implicate Bush in the selling of arms to Iran, the use of Panama as a narco-economy, and so on.

Anyway, Jeffrey Frank returns to the case of April Glaspie, ambassador to Iraq in the weeks before Saddam had had enough with a government that had sold arms to his sworn enemy in 1985:

According to the Iraqi account of the conversation, when Glaspie asked, “What solutions would be acceptable?” Saddam talked about the suicidal 1980-88 Iran-Iraq war, during which an estimated half-million people died, and insisted that Iraq, its economy wrecked by the war, had legitimate territorial claims on Kuwait and its oil. When Saddam asked, “What is the United States’ opinion on this?,” Glaspie replied, “We have no opinion on your Arab-Arab conflicts, such as your dispute with Kuwait. Secretary [of State James] Baker has directed me to emphasize the instruction, first given to Iraq in the 1960s, that the Kuwait issue is not associated with America.”

In 1991, in conversations with members of Senate and House foreign-affairs committees, Glaspie said that what she’d actually told Hussein was to “keep your hands off this country,” and that the Iraqi transcript included only “one part of my sentence. The other part of my sentence was, ‘but we insist that you settle your disputes with Kuwait nonviolently.’ And he told me he would do so.” But Representative Lee Hamilton asked a key question: “Did you ever tell Saddam Hussein, ‘Mr. President, if you go across that line into Kuwait, we’re going to fight’?” Glaspie replied, “No, I did not.” Still, the suggestion that the United States may have even unintentionally green-lighted Saddam’s war became an embarrassment for Glaspie, and pretty much ended any chance for another diplomatic posting. (She retired from the Foreign Service a few years later.)

Glaspie fell on her sword. Meanwhile we haven’t seen a comprehensive Poppy biography since the late nineties for the reasons outlined. And loudmouths bemoan the selling out of the U.S. to the Islamic Republic.