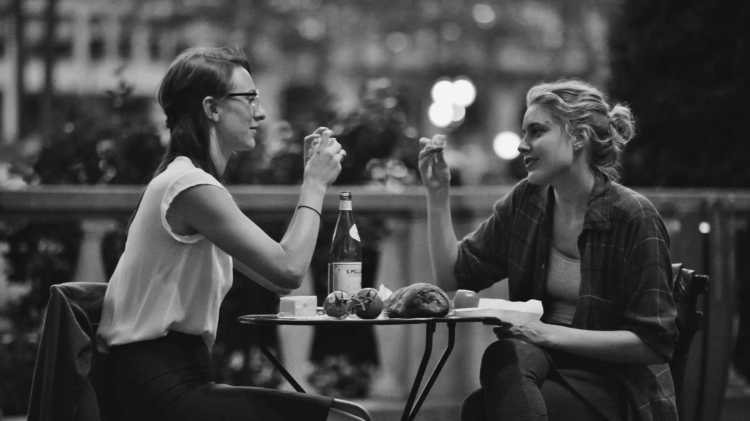 In Frances Ha, writer-director Noah Baumbach scores a perverse triumph: he creates a film whose title character is meant to be as garrulous, stunted, and insufferable as it’s possible to be. Greta Gerwig doesn’t act in any conventional sense; she performs a kind of feature-length skit or stand-up routine. Her large hands and feet and spasmodic movements adduce her adult-sized kid qualities. She’s a type, in other words, recognizable to late twentysomethings, which the pointless black and white photography apotheosizes: a Brooklynite who makes no money as an apprentice for a dance company and can’t afford her best friend Sophie’s (Mickie Sumner)’s company, drinking too much vodka and smoking too many cigarettes. When the money runs out she does the unexpected and moves crosstown to the Chinatown apartment of artists Benji and Lev (Michael Zegen and Adam Driver).

Playing what Pauline Kael would have a called a post-Godardian tootsie, Gerwig is affectless about her affect. Her sentences are semaphores of forced hilarity and appeals to private jokes that her companions are loath to get (to do so might mean encouraging her into a real conversation). During one awful dinner in which reaction shots telegraph the guests’ horror, Dean Wareham and Britta Phillips, playing the most self-possessed and gorgeous people in the movie — they’re like Spirits of Boho Past — regard Frances as if she were a boa constrictor in the Bronx Zoo. Baumbach’s camera does too as she spends two jetlagged days in Paris only to return to a part-time job as a part-time hospitality person at a college in Poughkeepsie.

At a fleet eighty-six minutes, Frances Ha doesn’t hang around long enough to wear down on nerves, and while in the first ten minutes I wanted to hurl a cinder block at everyone on screen its rhythms relaxed after a while, especially in the Benji-Lev sequence, where Gerwig and Zegen create a buggy intimacy devoid of sexual undertones (I thought Zegen was supposed to be gay). After their third scene, however, Baumbach establishes Gerwig’s style with other guys: she only hurls darts that she can parry when an interlocutor returns the gesture; it explains Zegen’s increasingly sour “Undateable!” catchphrase. Many critics have praised Frances Ha for being what it self-evidently is — a sociological study — and not what it does well, which is to observe friendship in all its tonal varieties, including the way in which envy and rancor flicker without warning and how accumulations of small hurts often suffice to call it off; it’s easier not to feel. The Squid and the Whale approximated these in the deluded, pompous Jeff Daniels character. Movie friendships Survive Hard Times or fade; Frances Ha is ambivalent enough to hint that we have no idea what will happen to Sophie and Frances. Friendship isn’t deeper than a marriage: it’s as fraught.

The ending is a fraud. The unease with which Baumbach addresses money and class curdles the film into downtown wish fulfillment. As usual American directors prefer skittering past these complications with “relationship” emollients gleaned from decades of sitcom watching.